Some saved lives. Others fought to overcome disadvantage or personal tragedy and still found it in them to lend others a helping hand.

In the midst of headlines often dominated by crime and catastrophe, the dreams and deeds of a few good Singaporeans stand out.

Every year, The Straits Times (ST) sees many of these stories.

The paper is today launching an annual award to recognise newsmakers who have touched the hearts of our readers. The ST Singaporean of the Year award aims to salute these newsmakers and the impact they have made, and honour one unsung hero in particular for his or her inspirational story.

ST editor Warren Fernandez said: "We run many stories about people who do brave and inspiring things. These include people like the grief-stricken father who lost his son but opened his home to wayward kids. Or the kind lady who took it upon herself to clean up and help an elderly man who had soiled himself in public, when others looked away. Or the two Singaporean runners who pulled off a feat of running 2,500km over 50 days to mark the nation's Golden Jubilee.

"We want to celebrate such individuals and their efforts with this award. We think this is a fitting way to mark ST's 170th anniversary and Singapore's 50 birthday this year." 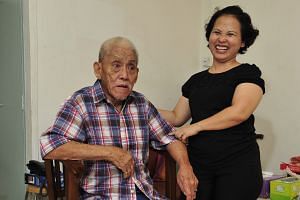 They stepped forward to help

Candidates will be shortlisted from those who made the news in the ST over the past year by a panel of editors and other judges. Readers will also get to make their nomination, which will be a factor in the final outcome. The winner will be announced in January each year.

Individuals and groups may be shortlisted based on the following criteria: Displaying resilience in the face of adversity, making a significant impact for needy individuals through voluntary work, risking one's life to help another in distress, or breaking new ground in doing good for the community.

Above all, the winner must be an inspiration to others.

Swiss bank UBS will be the accolade's sponsor for next year's inaugural event. UBS Singapore's country head Edmund Koh said that as Singapore marks its Golden Jubilee, it is timely to celebrate the triumph of the human spirit and honour those who have gone beyond the call of duty to make a difference. "We hope to give recognition to the Singaporeans who inspire us, motivate us and challenge us to make a positive difference to the community."

A version of this article appeared in the print edition of The Straits Times on July 11, 2015, with the headline 'Award for Singaporean who inspires the nation'. Subscribe
Topics:
More
Whatsapp Linkedin FB Messenger Telegram Reddit WeChat Pinterest Print Purchase Article Copy permalink