The Malaysian authorities further widened the search area yesterday, hoping to locate two Singaporean kayakers who have been missing since last Thursday evening, while relatives of the pair arrived in Mersing to help rescue efforts.

The authorities are combing the sea off Johor and Pahang states for Mr Tan Eng Soon and Madam Puah Geok Tin, with the search yesterday expanded to cover more than 500 nautical miles in the same area, up from 400 nautical miles on Saturday.

The authorities from the maritime agency, police and local fishermen are involved in the search for Mr Tan, 62, and Madam Puah, 57, who were last spotted in their green kayak.

Another statement issued later said the assets involved were one maritime plane and three maritime boats, assisted by a police boat and three fishermen boats.

It added that the authorities held a briefing session with the Singapore consulate and the pair's families, including Mr Tan's wife Kwan Yoke Yee, 58, and Madam Puah's husband Peng Mun Kit, 56.

Mr Tan and Madam Puah were paired together in the kayak and were part of a group of Singaporean kayakers. 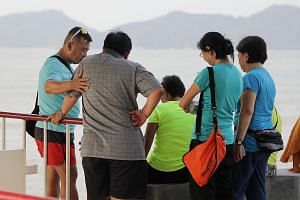 The group had departed from Mersing, Johor. The two later got separated from the group, with the others noticing they had gone missing only at 5.40pm on Thursday.

A police report was made the next day, followed by search and rescue operations, but they have yielded no clues or results so far.

According to Mersing district's acting police chief, Assistant Superintendent Mohd Nor Mohd Isa, the kayakers had gone out to sea despite poor weather conditions. "It was bad weather and rough waves," the officer told The Straits Times.

Search operations have been ongoing even though it has been drizzling. The search area in the past two days was north of where the group was kayaking due to the direction of the water currents.

Meanwhile, family members have arrived in Mersing to offer support and help for the rescue efforts. Ms Jen Pan, Madam Puah's niece, drove to Mersing from Singapore with other family members yesterday.

Ms Pan, who had joined her aunt on kayaking adventures when she was younger, told ST that things were not moving "as fast as (the family members) had hoped".

ST understands that fellow kayakers tried to hire two private boats to help with search operations, but it took two hours for the boats to obtain permission to go out to sea.

Ms Pan hopes that the Singapore authorities can do more to help find the missing kayakers.

"The first 72 hours are the most crucial. The clock is ticking and the search stops every time the sun sets. We really wish the Singapore forces can come and find our very own Singapore son and daughter," she said.