SINGAPORE - The Early Childhood Development Agency (ECDA) is investigating a social media post alleging that a childcare centre is ill-treating its wards.

The post, originally in Chinese, said that the centre in River Valley feeds rotten fruit to the children in its care, and lets the children sleep on the floor.

There are photos showing them sitting on the floor and playing without supervision.

One particular photo of a child lying in a cot, smeared with faeces, has caused strong reactions among netizens.

The caption accompanying the photo says the child ate the faeces.

The post on Weixin also claims that the centre forgot to prepare and give milk powder provided by a child's family, and it was thrown away.

The centre is believed to be Sam's Early Learning Centre at Jalan Mutiara.

When The Straits Times called the centre on Thursday, a woman said some of the photos were taken last year. She also said the captions were “not true”. 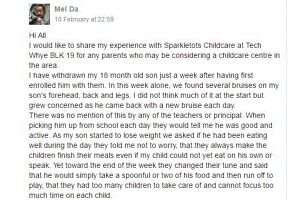 "The safety and wellbeing of children in child care centres are of utmost importance to ECDA," said a spokesman from the agency.

"Under the Child Care Centres Act, all child care centres are required to meet the stipulated regulatory requirements to protect the safety, wellbeing and welfare of children in centres."

Police confirmed that a report has been lodged and is looking into the matter.

ECDA said it is also aware of another case at a Sparkletots at Block 19, Teck Whye Lane.

A parent made a police report after she saw a teacher pin her 18-month-old toddler down. She said that she had found bruises on her son's forehead, back and legs.

"ECDA is working with the centre to ensure the safety and wellbeing of the other children at the centre," it said.