SINGAPORE - Asean needs to find new areas and fresh commitment to work together, so that the grouping can remain central to the region's architecture and future, said Prime Minister Lee Hsien Loong on Saturday (April 28).

"Asean can only maintain its centrality if it is a substantial endeavour, if its members see value in the shared enterprise," he said at the opening ceremony of the 32nd Asean Summit, which Singapore is hosting as this year's Asean chairman.

The alternative of a looser Asean, in which each member state is left to fend for itself and goes its own separate way, will make the grouping less relevant not only to its members but also its partners and other powers, he added.

"Individually, the Asean member states will find it hard to make much impact on their own. But when we speak in one collective Asean voice, we can be effective," said PM Lee.

It is therefore important for Asean to redouble its integration and community-building efforts.

PM Lee added: "Asean has to adapt and integrate further, to remain a central, dynamic driving force that can deal with the challenges and opportunities of the 21st century."

Among these challenges are a shift in the strategic balance of the world and the region, with new powers including China and India growing in strength and influence.

Free trade has also come under pressure, and trade tensions between US and China are a "worrying concern", said PM Lee, as he set out why Asean has to speak in a collective voice to be effective as it reacts to these major external trends. 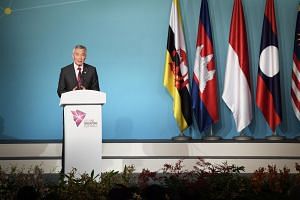 At the same time, Asean needs to be resilient against threats such as terrorism and cyber-attacks, as well as innovative in its use of technology to grow its economies, he said.

As chairman, Singapore is focusing on these twin themes of resilience and innovation.

On Friday night over a working dinner, Asean's leaders adopted a joint statement spelling out their common vision for a resilient and innovative Asean, vowed to cooperate on cyber security, and agreed to launch the Asean Smart Cities Network.

In his speech on Saturday, PM Lee also highlighted other plans in the works.

For its part, Singapore will set up an annual training workshop called the Asean Law Academy for Asean officials and legal practitioners, to promote legal education in the region and integration between the different Asean legal systems.

It will organise the first ever Asean e-sports tournament to connect youth in the region as well, and build a network of young leaders through an Asean Youth Fellowship Programme.

"We will continue to press on with our integration, and deepen our web of cooperation with our partners, so that Asean remains cohesive, relevant and effective for many more years to come," said PM Lee.

After the ceremony held at the Shangri-La Hotel, leaders met to discuss Asean's strategic outlook, its community building efforts, and its collaborations with external partners.