SINGAPORE - Lasalle student Priyageetha Dia has removed the "golden staircase" which sparked a debate about art in public spaces in Singapore.

She said in a Facebook post on Sunday (March 12) morning: "The existence and the end of this work bears my responsibility and no one else's. With a little trace left behind, a memento of the space.

"Till we meet again."

The "little trace" refers to a small square of gold foil that was left on the bottom step of the stairs.

She told The Straits Times in a text message on Sunday afternoon: "It was voluntarily removed by me, no pressure from the town council. To me, my work is already done."

Ms Priyageetha, 25, created the artwork in a Jalan Rajah HDB block for her final-year project. 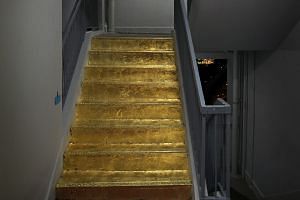 Golden staircase: Is it art - or not?

She covered one flight of steps on the 20th floor of the block with gold foil last Sunday, and photos of the project were shared online since early last week.

Some called the act vandalism, while others have defended it as "guerilla art".

In an interview with The Sunday Times, she said: "As an artist, I wonder why everything needs to be licensed. If I (had sought) permission, there wouldn't be a thrill in doing it; I need that adrenaline rush in my art-making process."

The Jalan Besar Town Council had said earlier that the act was unauthorised under the town council's by-laws, but had made no move to remove the foil.

Jalan Besar GRC MP Lily Neo has said the town council appreciated her work and hoped to work with Ms Dia to exhibit her work elsewhere, such as through wall murals.