A 64-year-old retiree is in a coma after falling on an escalator at Bishan MRT station on Saturday. We ask the elderly at MRT stations if the escalators are too fast for them

SINGAPORE (THE NEW PAPER) - The 81-year-old woman, who was carrying five tote bags with both hands, had no difficulty going up the escalator without using the handrails at Ang Mo Kio MRT station.

The woman, who wanted to remain anonymous, said she felt the escalators were "not too fast".

She then moved briskly into an awaiting train.

She was among the 17 elderly commuters, aged between 67 and 82, whom TNP spoke to at the station platform yesterday morning.

All said that they experienced no difficulties coping with the speeds of the escalator that was going up towards the platform. 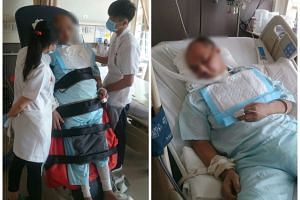 Madam Goh Eng Heng, 79, who was on her way home from a walk, said in Mandarin: "I feel that the escalators are okay, not (too) fast and not (too) slow."

Madam Goh added that although she cannot walk as quickly as other commuters, this posed little difficulty in managing the escalators.

Most of the elderly used the escalators instead of the lifts that were no more than about 5m away.

Mr Poh Keng, 81, who was on his way home from meeting his friends, said that the speed of the escalators were "not an issue" for him.

A retiree, Mr Ng Sew Hong, 67, even boasted that although he had "no energy" left in his legs, he could still take the escalators without any problems.

"Slowly go up the escalator," he said. "Don't think you are young any more. If you try to do something that you cannot, of course accidents would happen."

Mr Ng added that taking the escalator is not dangerous because people queue up to take it so he can take his time.

Mrs Jenny Thong, 72, told TNP that the reason she thinks that escalators are not dangerous is because she can still match the escalator's speed.

Mrs Thong will also "always hold the handrails" as it keeps her steady and more stable.

However, for some, taking the escalators during peak hours is a concern because of the crowd.

Mr Nadarasen, 70, said: "Sometimes, when people run for the MRT, they can hit us."

That is why he is scared to take the escalators during peak hours, he said.

He added that many commuters were busy using their phones and were less aware of their surroundings.

"At least now I take the stairs (during peak hours), it's better than sitting at home," he said.

Elderly should take lifts for safety

Instead of debating whether to slow down escalators at MRT stations, there should be public education about their safe use, said Dr Lee Der Horng, a transport researcher at the National University of Singapore.

"We have a local custom to stand on the left side, to let people who are in a rush walk up the escalator," he told The New Paper.

"But if you walk on the escalator, it can be quite dangerous because escalators are very long these days, especially at MRT stations.

"If you're not careful, you can fall and injure yourself and others."

The elderly should take lifts instead, he said.

"Through public education, we can also inform the elderly to use the lift instead of escalators, for their safety."

He also said the authorities might want to tweak the one aspect of escalators.

"There's a short flat stretch before you alight from the escalator, and there may be a short time for people to react.

"Perhaps MRT stations can work with the supplier to try to extend the stretch a little longer," he said.

Miss Christine Lim, 45, a housewife, said that when she takes her parents, aged 72 and 74, out, they use escalators for convenience, although the fast speed is evident.

She told TNP: "They take quite long to step on the escalator because it's very fast. I would discourage the elderly from using the escalator, they should take the lift instead."

The Land Transport Authority (LTA) is working with both rail operators, SMRT and SBS Transit, to trial reduced escalator speeds at selected stations that are often used by the elderly and children.

The LTA will put in place in all MRT lines a dual-speed feature that allows escalator speeds to be slowed during off-peak hours, said an LTA spokesman.

The LTA was responding to The New Paper's queries on escalator speeds after a 64-year-old fell at Bishan MRT and went into a coma.

"The LTA is sorry to hear about the unfortunate incident, and our thoughts are with the family at the moment," said the spokesman.

It was reiterating steps announced in September, when it reported that it would be taking up recommendations from the Public Transport Council's Advisory Report.