SINGAPORE - Itching to return to work, MP Tin Pei Ling skipped the confinement period after she had her first child, who is now four years old.

"I also didn't like the idea of living with so many restrictions, like not being able to go out or not washing my hair," she said.

But she soon realised the importance for mothers to recuperate just after childbirth and adhered to the period for her second child, who will be one next month.

She said: " Having that time and process to heal after giving birth is so important. For nine months the baby is inside you, and you're basically one entity. When you finally give birth, it's very draining and strenuous. It feels like having an entire organ taken out."

"The confinement period is also very important for the mother to establish that bond with her child, and regain the nutrients needed so you can breastfeed the baby."

Ms Tin was speaking at the Singapore Chinese Cultural Centre on Thursday (Aug 1) as guest-of-honour at the launch of a mobile application dedicated to educating young mothers on confinement.

Rather than abandon the practice, which has been handed down through the generations, she said knowledge about confinement needed to be updated.

Ms Tin, 36, said many of today's young women, including herself initially, do not abide by the confinement period because they need to go back to work, or they tend to dismiss the do's and don'ts related to it as myths. 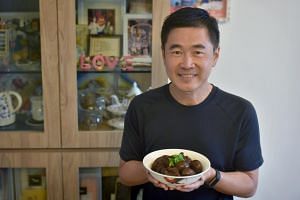 "A lot of knowledge surrounding confinement needs to be updated. The technology and levels of sanitation have improved since these confinement practices were first passed down by our grandmothers," she said.

Common myths include not drinking plain water, no washing of the hair, and only boiled water should be used to wash the body.

Called "Still Young", the app was created by six Ngee Ann Polytechnic students as part of their final-year project for a diploma in Chinese Media and Communication. They created it as a "one-stop platform" for mothers to learn about confinement practices, breastfeeding as well as proper diets.

Ms Tin praised the app and recommended that the students reach out to hospitals to promote their project.

Ms Vinny Ang, 19, one of the students in the group and the team's public relations manager, said it "strongly believes that confinement is an important postpartum process for mothers to recuperate as they embark on their journey of motherhood".

The group surveyed close to 100 Singaporeans, aged 18-35, including mothers from various local mother support groups, students and people on the street before coming up with the app. More than 50 per cent reported little, inaccurate or no knowledge of the confinement period.

The project was conducted in collaboration with pregnancy care company Madam Partum, the sister company of Chien Chi Tow, which provides traditional Chinese healthcare. Confinement information provided on the app has been verified by Madam Partum and Confinement Angels, a professional confinement nanny service in Singapore.

Still Young is also supported by The Breastfeeding Mothers' Support Group (Singapore) to ensure that all content with regards to lactation is reliable.

Development of the app was also made possible by the Young ChangeMakers Grant awarded by the National Youth Council.

"A lot of mothers want to lose weight after giving birth. But you need to recover first! After confinement, you can manage your weight with light exercise and planning your diet well," said Ms Yen.

But the burden of the post-natal journey cannot rest solely on the mother, said Ms Ang. "Both father and mother are a team. The father needs to educate himself on confinement as well to support the mother in her recovery."

Mr Kuay Rui Heng, 19, finance manager for the student project and the only male in the group that developed the app, said that he learnt more about the important role fathers played..

"Especially for mothers who go through depression after childbirth, fathers need to be there to support them," he said.

The group's project leader, 19-year-old Ms Jakelyn Yong, said: "A lot of fathers are quite clueless about what they can do to help. But the least they can do is provide moral support and say: I'm here with you."

The other members of the team are Ms Tan Zhi Hui, the assistant project manager; Ms Kok Nee Tsu, the publicity manager; and Ms Loo Yi Fei, the graphic designer - all aged 19.

With more than 200 downloads currently, Still Young is available for free on both the App Store and Google Play.