The Food Bank Singapore (FBSG), which was established in 2012 with an aim to be the organisation that centrally coordinates all food donations in Singapore, is a registered charity.

It has over 300 non-governmental organisations under its network of members, and reaches out to more than 150,000 beneficiaries.

Held at City Square Mall in Kitchener Road, the community engagement event had activities such as cooking demonstrations and talks on food insecurity and food waste. There were also booths providing information on sustainability efforts.

At the event, social impact app TangoTab was launched in Singapore.

Founded in 2012 by telecoms and Internet entrepreneur Andre Angel, TangoTab has donated over three million meals to partners in the United States.

In Singapore, it will work with FBSG as its charity of choice. 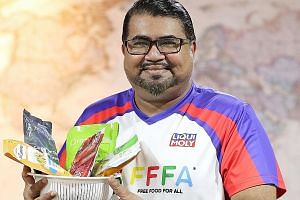 Causes Week 2018: Free Food for All who need it

Every time a diner checks in at a partner establishment on the app, TangoTab makes a donation to FBSG to feed a hungry person.

According to research findings, seven in 10 Singaporeans dine out for dinner, and more than six eat out for lunch every week, TangoTab said in a press statement.

Mr Angel said Singapore was chosen as it is seen as a tight-knit community where people care about their neighbours.

"In Singapore, one in 10 individuals goes to bed hungry every night. The launch of the TangoTab app in Singapore is only the first step of us creating a sustainable impact in this city to help feed the food insecure," he said.

"We are here to stay and we know that, together with FBSG, we can either end hunger or come really close to doing so."

Mr Nicholas Ng, co-founder of FBSG, said that the organisation has always been looking at "innovative partnerships" to further its cause.

"Together as a community, we are able to take greater strides for all," he added.