SINGAPORE - A crowd of Republic Polytechnic (RP) students were dancing and clapping to the beat at a campus concert before their cheers turned into bloodcurdling screams when four "gunmen" stormed into the venue and fired at them.

Five students and four security personnel were "killed", while five were "injured" during the "terror attack" on Tuesday (July 23).

The rest of the 193 students who escaped the gunmen's fire fled from the campus lawn to hide. The polytechnic in Woodlands went into "lockdown".

Within minutes, eight officers from the Singapore Police Force (SPF) arrived at the scene, took three of the assailants down and arrested the last one who surrendered.

The "shooting" was a simulated terror attack called Exercise Heartbeat, which is part of SGSecure's efforts to enhance the community's emergency preparedness in any location, be it on campus, in a hotel or shopping mall.

This exercise, which lasted about 15 minutes, is also the first to be conducted in a concert setting and held a few days before RP's annual student-led music festival that will start on Friday.

Senior Parliamentary Secretary for Home Affairs Amrin Amin, who observed the "shootout", said the exercise was targeted for young people as it was held in a school setting.

"Exercises like this bring out a sense of overwhelming crisis… we need to do this so our young people are sensitised and take additional steps to equip themselves with knowledge and emergency preparedness," he added on the sidelines of the exercise. 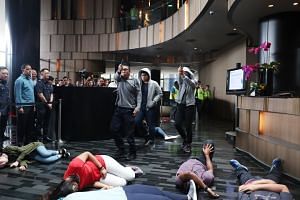 Police and SAF tackle 'bombs' and 'gunmen' in counter-terrorism exercise

This was the fourth exercise held this year. The previous three were carried out at Ang Mo Kio-Thye Hua Kwan Hospital in June, Crowne Plaza Changi Airport in May and 313 @ Somerset in January.

The exercise was jointly organised by SPF and RP, and supported by the Singapore Civil Defence Force, SMRT Buses and Wee Chwee Huat Scaffolding and Construction (WCH).

As WCH Scaffolding and Construction is part of the Safety and Security Watch Group within the Woodlands East Neighbourhood Police Centre, five of the company's staff were deployed to RP to administer first aid to the "injured", with the help of trained RP students.

In part of the exercise that was shown in a video, SMRT bus captains were directed to divert their routes away from the polytechnic.

Since 2016, RP has been conducting training and education for its students and staff to familiarise them with emergency procedures in response to terror attacks.

On top of upgrading the polytechnic's security facilities, the institute organises briefings and programmes to promote anti-terrorism awareness throughout the year, and arranges first-aid courses for its students, teachers and staff.

Second-year student Cecilia Lui, 18, who played an injured concertgoer at the exercise, said the first-aid training she learnt in school would help her react appropriately in the event of an actual attack.

"If I were trapped in a room with an injured person, I would know what material to use to stop the bleeding. If I were escaping from the attackers, I would tell others to run away with me to minimise casualties," added the infocomm student.