SINGAPORE - Days after a pangolin was found in Nanyang Technological University (NTU) on Tuesday (Nov 22), another one showed up at the National University of Singapore (NUS) on Saturday (Nov 26).

A video uploaded by student Ong Kah Jing on Facebook on Saturday night with the caption "Pangolin visiting NUS Utown" showed the critter gingerly finding its way down a flight of stairs at University Town in NUS.

Rescuers from the Animal Concerns Research and Education Society (Acres) turned up at NUS around 10.45pm as the pangolin was making its way towards a railing in the area.

By then, the nocturnal animal had gathered its own entourage - a small, very excited crowd had converged around it.

The animal was "calm and just kept walking", according to Acres wildlife group director Kalai Balakrishnan. It was given a quick visual check for injuries before being placed in a carrier and handed to the zoo for it to be microchipped and placed in a safe, suitable habitat.

It's not clear if the pangolin was a male or female, but Mr Kalai estimates that it is of sub-adult to adult age and larger than the one found at NTU.

"But if they feel threatened, they will protect themselves by rolling into a ball," he added.

"Follow it to keep track of where it goes. Photos are good too - they provide clues on whether the animal is injured or whether Acres might need to prepare some rescue tools if they are stuck somewhere," said Mr Kalai. 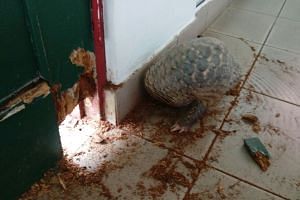 In cases where they are in danger of getting run over by vehicles, get help to divert oncoming traffic away from the animal if it is possible and safe, while waiting for Acres to arrive, advised Mr Kalai.

While pangolins are safe from poaching in Singapore due to strict laws, it is endangered in many other places due to wildlife trafficking.

"It is a good thing to know these animals are still surviving here, but they are critically endangered animals so we need to do more to protect them," said Mr Kalai, who estimates that there are about two to three pangolin cases a month which Acres handles.

The National Parks Board (NParks) estimates that there are more than 100 wild pangolins here.

The pangolin also stirred some excitement as it is examination season in NUS. Facebook user Raze Seah felt it boded good fortune to those who chanced upon it. "All A for exam", she wrote.

Another user, Michael Lim, joked that the pangolin was done with school: "The lecture was so boring, I'm going home now..."