SINGAPORE - By 7.30am, commuters were rushing across the busy junction of Ang Mo Kio Ave 3 and 8 on Friday (June 28), but with about one in every eight still looking at their mobile phones.

Barely a few feet away from the passing cars, on the edge of the pavement, pedestrians stood transfixed by their devices as they waited to cross.

Now the authorities hope something else will catch their eye, and remind them to be aware of road safety.

Strategically pasted on the pedestrian ramps on the corners of the intersection and at the entrance to the Ang Mo Kio MRT station since Wednesday are large yellow stickers that say "LOOK UP", along with a picture of a mobile phone crossed out.

Next to the traffic lights at the junction are also mini billboards reminding pedestrians not to be distracted while crossing the road.

The pilot initiative is by the Ang Mo Kio GRC, together with the Land Transport Authority (LTA), Traffic Police, Road Safety Council and Singapore Kindness Movement.

MP for Ang Mo Kio GRC Ang Hin Kee said that five members of the public have told him in the past four months that they witnessed near misses involving pedestrians looking at their phones while crossing the roads.

"Sometimes you need to prompt people to be aware of their surroundings. We may assume that cars stop because the traffic light is red, but what if there is an accident? Something may come towards you and you may not even be aware of it," said Mr Ang.

Security officer Siti Izam, 32, who lives in Ang Mo Kio, said that the new stickers placed at the junction "can serve as a good reminder to people walking around with phones". 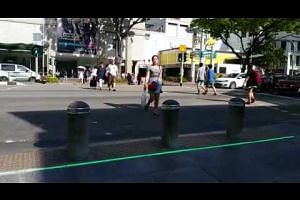 How 6 other countries tackle smartphone zombies

Horns are growing on young people's skulls due to phone use? Experts cast doubts on study

But pedestrians could be seen on Friday still on their devices while standing next to the stickers.

"I always see people looking at their phones, on the road and on the streets. Even if you put this sticker on, people may not bother," said Ms Candy Chew, who crosses the junction every day as part of her morning walk.

"The individual must know what it means to be safe, rather than people telling them what to do."

The 53-year-old said that she has to remind her niece and nephew to stop using their phones on the road at times, and that "their phones are not their life".

A similar initiative involving embedded LED strips in the pavement of two pedestrian crossings at the junction of Buyong Road and Orchard Road, and the Victoria Street crossing outside Bugis Junction, was tested for six months in 2017. The LED lights are still functioning at the two locations, and new ones have been added at the St Andrew's Road crossing in front of the National Gallery Singapore and at the Bencoolen Street crossing between OG Albert and Sim Lim Square.

The Traffic Police does not keep statistics on the number of accidents involving pedestrians using mobile phones, but in April, a woman was hit by a taxi while using her phone in Lavender Street near Kempas Road.

Mr Ang said that he hopes the stickers will not only prompt phone users, but those using headphones to be more aware of their traffic surroundings.

"There are many who listen to music while crossing roads, and their attention is drawn somewhere else," he said.

In the Bangladeshi capital, Dhaka, a total of 535 people have been hit and killed by trains since 2010 while they were wearing headphones on tracks, police said on Thursday.

Ms Chew added: "You only live once. At the end of the day, you must be healthy and safe."