Special needs children learn music and drama at this charity

Ms Wee Wei Ling, daughter of billionaire banker Wee Cho Yaw, chairman emeritus of United Overseas Bank, is marrying her passion for performing arts with her desire to do good.

Her myriad interests include classical singing and ballroom dancing. Together with her cousin Wee Boo Kuan, they founded Extra.Ordinary People - a charity that provides performing arts classes and therapy to children and young people with disabilities.

The pair gave about $1 million in seed funding to start the charity last year.

Ms Wee, who is in her 60s and is the executive director for asset and lifestyle at Pan Pacific Hotels Group, said: "It's easier to just write a cheque (to give to charity). To set up a charity is a lot more work. But by doing so, I believe we will be able to share more with people and touch more people's lives."

She was introduced to children with special needs when she sponsored a teacher to give harmonica lessons to children at two special education schools.

She saw how their faces lit up during the music lessons and how happy that made their parents.

She said: "These children may not be strong in academics, but it does not mean they are not strong in other areas."

She feels that music and arts therapy can benefit these children, but most performing arts schools do not cater to children with special needs.

So Extra.Ordinary People stepped in to provide classes in dance, drama, vocals and handbells, among other areas. 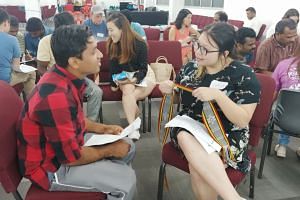 With the growing number of children diagnosed with special needs, there is also a shortage of therapy services for them, said Mr Wee Boo Kuan, who is in his 50s. His father is the late Mr Wee Cho Bian, Mr Wee Cho Yaw's brother.

Hence, the charity also offers services such as art, and educational and occupational therapy, and the therapists work as a team to help a child.

Mr Wee Boo Kuan said the charity charges $15 for a one-hour session for its performing arts lessons, which is heavily subsidised.

It's easier to just write a cheque (to give to charity). To set up a charity is a lot more work. But by doing so,
I believe we will be able to share more with people and touch more people's lives.

As for therapy services, it charges $150 per session for a package of 10 sessions - a rate which falls between the fees charged by government-subsidised services and private operators, he said.

He added: "People think that to be extraordinary, you need huge resources. You just need to have the heart."

Housewife Lim Wei Ping, 43, sends her only son, Hong Yang, for art therapy at Extra.Ordinary People. The 15-year-old, who has autism, has also attended performing arts classes, such as percussion and hand chimes, during the school holidays.

Said Ms Lim: "I signed him up for these classes to give him exposure and to help develop his brain. The quality of interaction between the teachers and students, and their heart for the children, is impressive."

A version of this article appeared in the print edition of The Straits Times on December 21, 2018, with the headline 'An extraordinary gift of the arts'. Subscribe
Topics:
More
Whatsapp Linkedin FB Messenger Telegram Reddit WeChat Pinterest Print Purchase Article Copy permalink