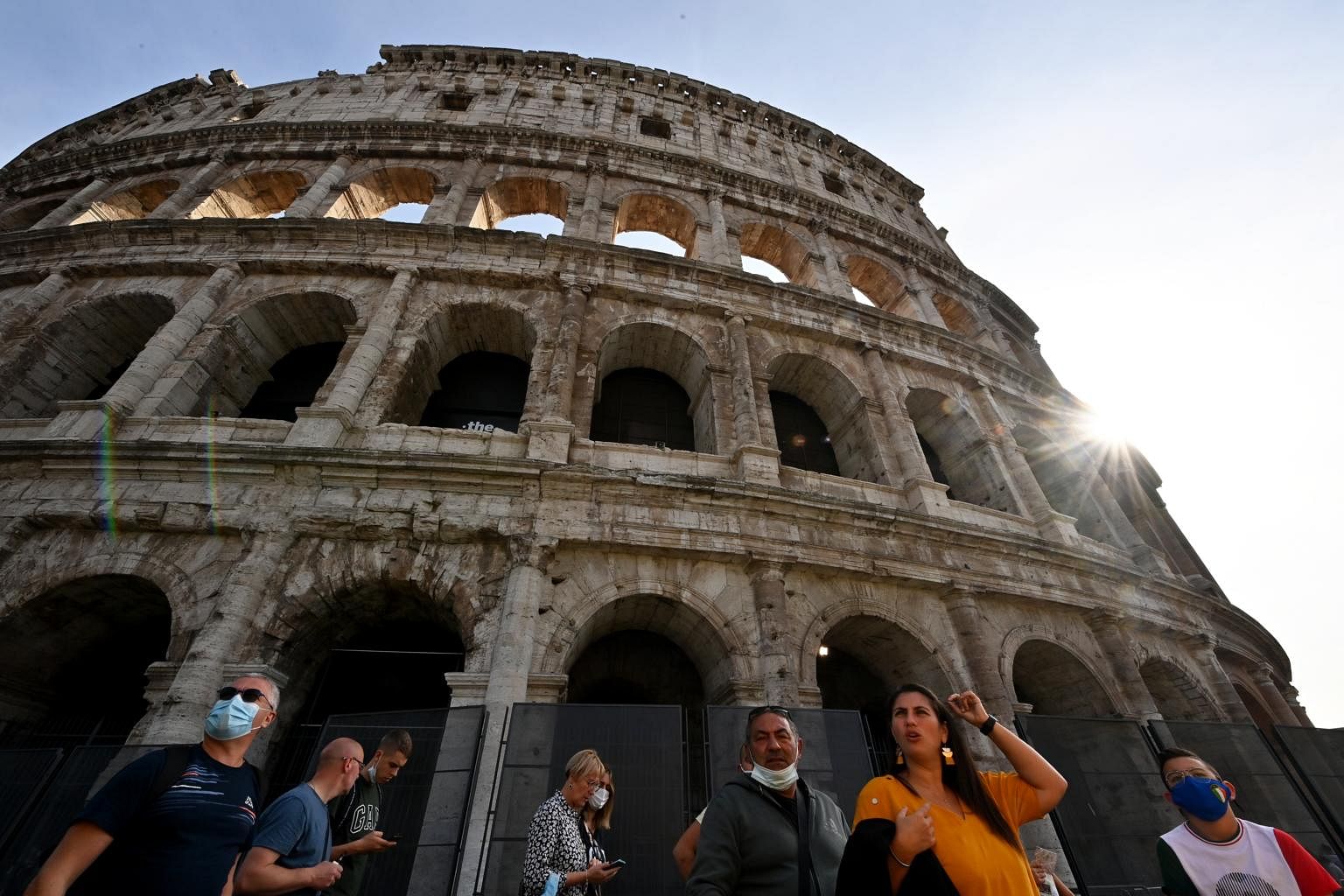 ROME - In the days leading up to my trip to Italy to cover the Group of 20 (G-20) Leaders' Summit, I fretted about all the things that could go wrong.

What if my pre-departure Covid-19 test turned up positive hours before I was supposed to leave?

What if I missed out on a crucial bit of paperwork and ended up getting turned back at the border?

As it turned out, I needn't have worried. When I arrived at Rome's Fiumicino Airport on Tuesday morning (Oct 26) with my colleague, ST executive photojournalist Lim Yaohui, no one asked for proof that we had been vaccinated or that we had tested negative for Covid-19.

We simply collected our baggage, walked through a door and found ourselves in a crowded public arrival hall, being shouted at by cabbies touting for fares.

We later learnt that spot checks are usually done on a random basis.

If not for the fact that most people were wearing masks, it was just like pre-pandemic times.

Preparing for the trip was the difficult part.

First, you have to look up travel requirements on two fronts and keep ahead of constantly shifting rules. When we first began planning the trip, Singapore did not have a Vaccinated Travel Lane (VTL) arrangement with Italy. This meant we would have to serve a stay-home notice on our return.

Next, there are the various documents to get in order. Italy requires all incoming travellers to fill in a Digital Passenger Locator Form. I also had to get my vaccination certificate notarised - a relatively painless process done online - to prove that it was genuine.

And of course, I had to take a pre-departure polymerase chain reaction test within 72 hours before arriving in Italy. The flight from Singapore to Rome was just over 16 hours long, including a brief stopover in Copenhagen.

That meant I had 56 hours - or slightly more two days - to get the swab done, have it processed and receive the results.

The timeline was tight and had I tested positive, the trip would have been scuppered. Instead of spending the next nine days in Rome, I would probably have spent them isolated and recuperating on an inflatable mattress in my study room.

Fortunately, everything went according to plan. But as I packed extra face masks, antigen rapid test kits and a thermometer into my bags, I was reminded that the virus could strike yet.

At Changi Airport, this impression was reinforced when we were stopped from entering our boarding gate by a staff member escorting a long line of people with green wristbands.

Transit passengers from a Category Three country, we were told. Don't get too close.

When we finally entered the waiting area, we saw it had been divided into two parts to keep both groups of passengers separate.

But somehow - perhaps due to a miscommunication - we were on the same side of the barrier as the passengers we had been told to avoid. In any case, we were all going to be on the same Singapore Airlines plane, so perhaps it wouldn't have made a difference.

Cabin crew on the plane wore plastic goggles and face masks throughout and all the passengers also kept masks on, taking them off only to eat.

Those who let their masks slip off at other times were reminded gently, but firmly, to put them back on.

Each passenger also got a "care kit", containing a mask, disinfectant wipes and a travel-sized bottle of hand sanitiser.

It was also one of the emptiest flights I have been on. In economy class, where I was seated, each row of nine seats was occupied by only three or four people.

This meant I had three seats to myself and could lie down for a proper doze - an unexpected luxury.

Doing as the Romans do

Walking about central Rome on Tuesday, I got the overwhelming impression that people had reached a comfortable equilibrium with the virus.

The country of around 60 million people has fully vaccinated 82 per cent of its eligible population, and saw around 4,000 new cases on Tuesday.

The region of Lazio, where Rome is located, has around six million people. It reported 437 new cases that day.

One of the first things we noticed was that only about one out of every 10 people wore a face mask outdoors as this is no longer a requirement.

Cafe tables were squeezed close to one another on the pavement, with no attention paid to safe distancing, although waiters were masked.

And tourism is beginning to pick up, judging by the healthy footfall at major tourist sites.

Yet, some signs of the ongoing pandemic are a reminder that continued caution is necessary.

We quickly found out that tourist attractions required a Green Pass, which is available only to European Union citizens. As we were told that some places might not accept our vaccination certificates, so the only alternative was to do an antigen rapid test at a pharmacy. This cost €22 (S$34) and was valid for 48 hours.

"Please keep a distance of at least three steps between you and the person in front of you," exhorted one sign at the foot of an escalator in the airport.

"Before we return your luggage, we sanitise it with disinfectants," read another. "Your baggage might feel damp when you pick it up."

At our hotel, staff took our temperatures when we checked in. Breakfast time slots were staggered to reduce mingling among guests, and we had to put on masks and plastic gloves before helping ourselves at the breakfast buffet.

On the way to our hotel, we asked our driver, Massimiliano, how most Italians felt about Covid-19. Were they afraid of the virus, given how it had ravaged the country in the early months of the pandemic? Or did they no longer see it as a threat?

Our masks stayed on since we landed in Italy. With another two days to go before the G-20 summit kicks off, it would not do to fall ill before the real work begins.

Even so, what we have seen so far is a heartening glimpse of a potential future for Singapore as it works towards living with the virus - even if that future is some time away.