SINGAPORE - The Our Tampines Hub Hawker Centre (OTH) - the only one out of 114 here to operate round the clock - will not have any of its current 42 hawkers serving food and drinks in the wee hours from next January.

The remaining 13 hawkers that had been operating 24 hours daily at the OTH have taken up an offer from the operator allowing them to cease doing so from Jan 1. The other 29 hawkers had earlier ceased 24-hour operations.

There had been complaints from some hawkers at the OTH in recent months of having to operate in the wee hours despite low footfall.

A spokesman from Kopitiam said the company held a feedback dialogue two weeks ago with stallholders, with none opting for 24 hour operations. "We will review and from next year onwards (1 Jan) the hawker centre won't be operating on a 24-hour basis," he added.

Some of the 13 hawkers, who took up the option of not operating hours, told The Straits Times on Tuesday (Nov 20) that the move would give them more flexibility, and even reduce costs.

Mr Afzal Ali Bhatti, 42, owner of Best Zaika, an Indian food stall at OTH, said he has cut his hours to 16 a day, citing low footfall at some hours of the day. "If we sign up for 24 hours, some times the extra food we make just sits there. And sometimes even when we finish selling the food we still have to keep (the stall) open," Mr Afzal said.

Meanwhile, Mr Andrew Hwang, a hawker in his 30s who runs a fish soup stall at OTH and opted out of 24-hour operations, said he would be able to save on operating costs.

He said he is likely to save about $3,000, as he will not have to hire an assistant to cover 12 hour shifts. 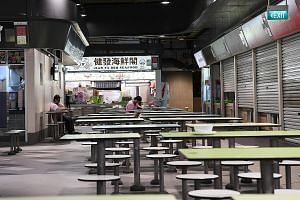 Does it pay to have 24-hour hawker centres?

"The hawker centre is in a quiet neighbourhood, so there aren't many customers in the wee hours," Mr Hwang said.

However, some cited downsides to operating fewer hours.

Mdm Ishah Aman, who runs Warung Wak Dining at OTH, said working fewer hours would give her more rest time but could also pose a bigger challenge to sell out her food.

A 35-year-old office worker, who wanted to be known as Kevin, said he usually patronises the OTH during dinner, so changes to opening hours do not affect him. "If there aren't many customers, the hawkers should get some rest," he said.

But Miss Rachel Koh, 24, said she would miss dropping by the hawker centre to grab a midnight snack. "It's always nice to have a cheaper option rather than just ordering in."

The tweak to OTH's contractual terms was revealed by Senior Minister of State for the Environment and Water Resources Amy Khor in Parliament on Monday, who spoke about measures to improve the Social Enterprise Hawker Model.

The OTH is among seven hawker centres under the model, which has come under flak recently over what the NEA described as "onerous" contract terms for dishwashing, rental costs and working hours.