Every cent of the $33.7 million paid out by Aljunied-Hougang Town Council to its managing agent was improper and illegal, because the town councillors had not acted in good faith when they contrived to hire the managing agent without calling a tender.

The onus is thus on the Workers' Party town councillors to prove that the money had been properly used, if they want to exonerate themselves.

Arguing this yesterday in the High Court in the case brought by AHTC against its own town councillors, lawyers for the town council said the entire sum of $33.7 million had been paid under a flawed system tainted by conflict of interest.

First, the town councillors had tried to benefit their friends, Ms How Weng Fan and Mr Danny Loh, when they appointed the couple's FM Solutions and Services (FMSS) as managing agent in the "most egregious, surreptitious and dishonest manner", without first calling a tender. In doing so, they had subverted the law.

Second, the town councillors had also appointed Mr Loh as secretary of the town council and Ms How as general manager, giving them free rein to both issue payments to their own company for works done, and verify the works were completed.

This amounted to an abdication of their obligations as custodians or fiduciaries.

Taken together, the conclusion is the town councillors had failed to act honestly, in good faith, and in the best interest of their residents, said the lawyers representing AHTC and Pasir Ris-Punggol Town Council (PRPTC). 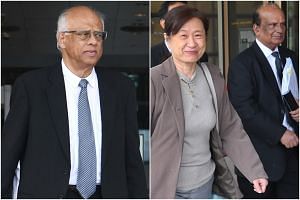 AHTC lawsuit should be capped at $620k, say defendants' lawyers

This also means any contract they had made with FMSS was ultra vires, or beyond their legal powers.

"In those circumstances, the burden shifts to the defendants to show that there was value given for each and every item of expenditure," said Senior Counsel Davinder Singh, representing PRPTC. "Likewise if the contracts were ultra vires, then all the payments have to be repaid because they are void."SC Singh as well as Mr David Chan representing AHTC were making their closing arguments in the case that had gone to trial last October.

PRPTC is suing to recover its share of losses incurred when Punggol East constituency was run by AHTC from 2013 to 2015.

Mr Chan said there were "collateral purposes" and "ulterior motives" behind the hiring of FMSS, pointing to correspondence to show it was done to benefit Mr Loh and Ms How, and also to uniquely position FMSS as an opposition managing agent.

He added that WP chairman Sylvia Lim and former chief Low Thia Khiang had orchestrated the hiring of FMSS, knowing the conflict of interest that would arise. At several junctures, like at town council meetings, the two MPs had also withheld information from the other town councillors, such as the fact that FMSS would cost more than the town council's then-managing agent CPG, he said.

By hiring FMSS, he added, they had also put in place a flawed governance system bereft of accountability, which has the potential to conceal all improper payments made and hinder efforts to assess just how much ought to be recovered.

What emerges is a very disturbing picture of political opportunism. It is one thing to leverage on your own merits and strengths to advance your political cause. It is another to use the hard-earned monies of innocent residents to improve your political standing and to score political points.

Quoting independent auditor KPMG - appointed in 2016 to look into the books of AHTC after the Auditor-General's Office found significant governance lapses in a special audit - he said that only the town councillors themselves will be able to determine the quantum of improper payments made, which the second tranche of the trial is meant to discover.

SC Singh, making similar points, said these circumstances that gave rise to the appointment of FMSS and the consequences that followed are "anchored in the absence of good faith".

He added: "What emerges is a very disturbing picture of political opportunism. It is one thing to leverage on your own merits and strengths to advance your political cause. It is another to use the hard-earned monies of innocent residents to improve your political standing and to score political points.

"It is hugely disappointing that despite so many opportunities to come clean, the defendants remain unremorseful. What they have done is morally wrong, but today in this court of law, your Honour, it is critical that the country knows that the system must work and it must work honestly or else there will be consequences."

Justice Kannan Ramesh will give his decision at a later date.