It usually takes an average of two to four years to procure a patent.

The Intellectual Property Office of Singapore (Ipos) said yesterday that the patent was granted under the office's Accelerated Initiative for Artificial Intelligence.

The expedited process helps innovators bring their AI inventions to the global market faster through Singapore.

This has the potential to strengthen Singapore's position as an intellectual property (IP) hub for cutting-edge technologies in the digital economy.

Ipos is also set to sign six memorandums of understanding (MOUs) and partnership agreements to connect Singapore to other innovation communities, with the aim of using the Republic as a gateway to new markets.

The MOUs include those with the UK Intellectual Property Office, Brazil's National Institute of Industrial Property and the Qatar Free Zones Authority. 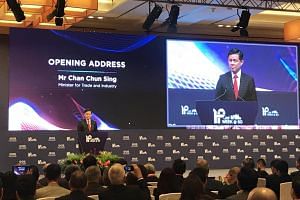 Global advancements in AI technology have resulted in an exponential rise in the number of AI patents being filed.

Mr Benjamin Bai, vice-president and chief IP counsel of Ant Financial, an affiliate of the Alibaba Group, welcomed the expedited patent process, which "plays a pivotal role as it facilitates our entry into markets of interest rapidly".

Singapore is not the only Asean member to capitalise on the growth of AI innovation.

In a collective effort to boost the flow of innovation into the region, the Republic and eight other Asean IP Offices will prioritise patent applications in key emerging technologies such as fintech, cyber security and robotics.

The pilot project, expected to run for two years, started on Tuesday.

Under the initiative, businesses and innovators will enjoy a short turnaround time of six months for the first office action report, a document written by a patent examiner in response to an application.

The initiative is designed to support Asean's Industry 4.0 plans.

The Fourth Industrial Revolution, or Industry 4.0, explores the reskilling of workers with the skills necessary to use new technologies, such as AI.

Industry 4.0 is expected to deliver US$1.2 trillion (S$1.7 trillion) to US$3.7 trillion in gains globally, and US$216 billion to US$627 billion for Asean, given its significant manufacturing composition.