SINGAPORE - Four employees of ground-handling firm Dnata Singapore were commended for helping the police nab a man who stayed in Changi Airport for 18 days by forging boarding passes.

In a ceremony held at Airport Police Division on Tuesday (Sept 20), the four were commended for their public-spiritedness, police said.

Raejali missed his flight to Kuala Lumpur on the morning of Aug 21.

He then downloaded images of mobile boarding passes from the Internet, and used an image editing software on his laptop to alter them. 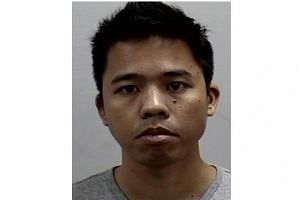 Raejali inserted his name, a false flight number and a false destination on the fake mobile boarding passes, before sending them to his phone.

An alert worker at a Dnata lounge, which Raejali visited four times, saw through his ruse and called the police.

"Due to the staff's vigilance, the man's misdeeds was uncovered. The police were alerted and arrested the man shortly," police said.

"This case illustrates the close partnership between the Police and the airport community in fighting crime... We thank these staff for being vigilant and assisting the Police to arrest the man," said commander of the Airport Police Division, assistant commissioner Cheong Chee Ming.