SINGAPORE - Ageing should not be talked about here as a problem, as such a perception can end up being self-fulfilling, said Mr Tan Chuan-Jin, chairman of a People's Action Party (PAP) group that champions elderly causes.

Instead, Singapore should boldly reframe its narrative of ageing to a more "positive agenda".

Speaking on Sunday (Oct 13) at an event to mark the International Day of Older Persons, Mr Tan said: "Should we not try to be able to say this - that our best years are ahead of us... Can we also aspire to become the best place on earth to retire and grow old in?"

Not just as a result of policies and initiatives at the Government level, Mr Tan said, but also because of community activities and individual participation as well.

"Can we, at the individual level, embrace this and participate fully in a whole effort to make this vision a reality," he asked at the event organised by the PAP Seniors Group (PAP.SG).

His comments come as Singapore ages, with citizens above 65 years old making up around 15 per cent of the total population today.

Mr Tan, who is also Speaker of Parliament, said while an ageing population brings deep and serious challenges to many societies, Singapore may be able to thrive given its effectiveness in making long-term plans to tackle related issues.

At the event in Hotel Miramar Singapore, Mr Tan announced that the PAP.SG has produced a handbook to help party activists explain government initiatives to seniors, as they have found it challenging to track recent policy changes. 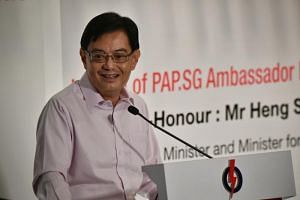 Singapore can learn from Japan how to cater to elderly at home, in workplace as society ages: PM Lee Hsien Loong

Silver, the new gold: Longer lives offer opportunities to tap, instead of problems to solve

Mr Tan said it is the latest of party members' initiatives for seniors in Singapore, which range from a "Senior Friendship Circle" in Ayer Rajah to assistance programmes for vulnerable seniors in Bedok.

The handbook will also be available online.

Mr Tan noted that some of the recent policy changes came after suggestions made by the PAP.SG, which had submitted a paper to the Government in January this year.

These included the raising of the retirement and re-employment ages, as well as CPF contribution rates for workers above 55, which will level off after the age of 70.

Other changes included a commitment by the Ministry of Health to roll out a Caregiver Support Action Plan over the next two years to enhance financial support for caregivers; other initiatives to boost healthcare affordability; and an increase in housing choices for the seniors.

THE BIG STORY: More needs to be done in Singapore to tackle ageing population | The Straits Times