When Australian financial risk director and avid chess player Bradley Loh moved from Sydney 20 months ago to work in Singapore, he knew nobody who could play the game with him.

Today, however, he has more than 300 chess buddies. This is because the 38-year-old set up his own after-work chess community, which plays at the outdoor atrium of Asia Square Tower 1 in the swanky Marina Bay financial district.

Every Wednesday, in one corner of The Cube - the tower's airy public plaza spanning 100,000 sq ft and featuring a 16m-high ceiling and fountains - about 30 players huddle over chess sets on outdoor tables joined together.

Just about 10m away, the well- heeled, after-work crowd relaxes over drinks at The Exchange restaurant and bar.

But in the vast sheltered space of The Cube, the sounds of revelry are muted and the setting is peaceful and conducive to the mental battles fought from 7pm to 10pm. 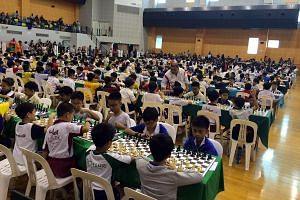 Game of chess is king for these children

Mr Loh, who works for Macquarie Bank, started playing the game of kings when he was 17 and, though largely self-taught, reached the Fide rating of 2,150 when he was 23 by competing in Sydney's weekend tournament circuit.

A Fide rating, given by the Federation Internationale des Echecs, or World Chess Federation, is based on how a player performs against others and it starts at 1,000. Grandmaster Zhang Zhong is Singapore's top-rated player at 2,634.

What Mr Loh hoped for but could not find in Singapore was "pub chess" or "outdoor chess", well known in major cities such as New York, London, Sydney, Toronto and Zurich, where adults can play socially and casually.

So, harnessing the power of social media, he registered a Singapore chess group on community application Meetup. In less than a year, it grew to about 350 members.

About half are Singaporeans and half are expatriates, many of them very good chess players who stopped playing competitively after they started work, said Mr Loh.

There is a mix of experience and skills and all are welcome, he stressed. Passers-by who chanced upon the group at The Cube have ended up becoming regular players.

It was tough, though, to find space in Singapore that is free to use every week for at least three hours - about the duration of a standard game of chess, said Mr Loh.

He was turned down by cafes, pubs and restaurants before a friend suggested Asia Square in the Central Business District (CBD).

So he e-mailed the building's management in February last year and was given the go-ahead within a few weeks.

He bought 10 boards and chess sets and lugs them around every Wednesday. He organises the setting up, helps match players and also holds mini-tutorials and contests - a chess puzzle which might have a bottle of wine up for grabs - to encourage beginners.

"It's a small price to pay for the privilege of getting to meet and socialise with people here," he said.

Mr Reinhard Sellmair, a doctoral student from the Technical University of Munich, became a regular player after coming across the Meetup group on Google about two months ago. The 33-year-old, who works at the Campus for Research Excellence and Technological Enterprise within University Town at the National University of Singapore (NUS), was taught by his father to play chess when he was just three or four years old.

As a teenager, he competed at the highest chess club leagues and holds a Fide rating of 2,000.

He said: "I played a few tournaments in Singapore but the players were mostly children. Now I am meeting a lot of people my age."

Singaporean lawyer David Liu, 33, who once captained the NUS chess team but stopped playing for years, said the Wednesday sessions, which he joined six months ago, got him playing in a tournament again.

"Brad is a real inspiration. Here's a guy, who doesn't know anyone here, but he sets up a chess club in the middle of the CBD," he said.