And then came the time to unwind.

It was a cool, overcast evening, but the mood was jubilant when Asean leaders and their key partners gathered yesterday for a gala dinner at the end of a gruelling day.

As he flagged off a night of food, festivities and free-flowing conversation, Singapore Prime Minister Lee Hsien Loong noted that there was much to cheer about.

It had been a busy year of mapping out and launching deliverables to strengthen the Asean community and benefit its people, he said at the start of the dinner for the 33rd Asean Summit and related meetings, the final milestone of Singapore's one-year chairmanship of the regional grouping.

"I think we have once again outdone ourselves," said PM Lee, referring to the bloc's achievements this year.

This, he added, would not have been possible without the collective commitment and efforts of Asean and its partners.

"Therefore, tonight we deserve to let our hair down just a little and to celebrate," said PM Lee. "To celebrate the fruits of our labour. To celebrate our strong and enduring friendship. To celebrate how far Asean has come and our future ahead."

The bonhomie was evident at the gathering, depicted by PM Lee as one that is among family members and close friends.

Philippine President Rodrigo Duterte, however, was a conspicuous absentee.

He skipped the dinner for some much-needed rest, said presidential spokesman Salvador Panelo, adding that Mr Duterte - who had also been absent at several events earlier in the day - had been working late the previous night, getting less than three hours of sleep.

PM Lee noted that Asean leaders had met no fewer than six times this year at Asean-related events, while its officials have held countless meetings.

These meetings bred familiarity and built an Asean spirit "that is especially palpable when we see each other at international fora".

And the grouping, which turned 51 this year, has also forged lasting friendships and memories with its external partners, added PM Lee.

These close bonds were on full display at the dinner. 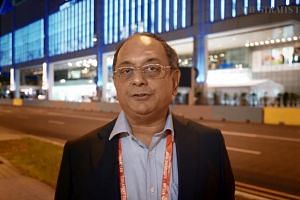 Summit with Velloor: Leaders gather for 'the biggest game in town'

Indonesian President Joko Widodo and Indian Prime Minister Narendra Modi delved into conversation once they slipped into their seats next to each other.

At the next table, Indonesia's Retno Marsudi and South Korea's Kang Kyung-wha - two of a rare breed of female foreign ministers - sought each other out for a handshake.

PM Lee said: "I hope that each one of us will bring back some-thing memorable after this year's chairmanship."

This could be from knowing that some of the strides made this year will uplift people's lives, seeing the joy on the faces of youth who took part in Hyperplay, Asean's first e-sports and music festival, or experiencing the showcase of the region's rich cultures.

"Or, perhaps, you will miss Singapore food after all the meetings you have had here," quipped PM Lee.

Last night, Asean leaders got yet another taste of Singapore, dining on dishes inspired by local favourites - "and we have jazzed it up a little since most of you probably are already quite familiar with the local food", said PM Lee.

The local breakfast classic of kaya toast and kopi got a nod as well in the form of an egg-and-coconut dessert infused with pandan, and paired with wafers and coffee ice cream.

PM Lee pointed out that Asean has stood the test of time by embracing its diversity as a strength, and forging friendships based on mutual understanding and respect.

"We have laid the groundwork for a more united, resilient and innovative Asean - not just for ourselves, but for future generations," he said.

"I hope that we will also pass on to our youth this spirit of camaraderie and unity we have cultivated over the last half century so they will forge an even brighter future for Asean together."