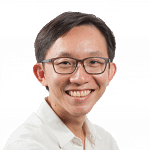 Even though the number of tickets available for the Singapore Airshow 2020 was reduced by more than half compared with the previous edition due to the coronavirus outbreak, the flying display performances still drew large crowds yesterday, the first public day of the show.

Audiences also caught sight of the United States Marine Corps' F-35B Joint Strike Fighter, and the US Pacific Air Forces' F-22 Raptor. The US Air Force's B-52 Stratofortress performed a flyover to end the display yesterday.

While a number of booths in the exhibition hall were empty due to trade exhibitors pulling out, local booths belonging to the RSAF and ST Engineering bustled with visitors.

The Singapore Airshow mascots, Captain Leo and Captain Leonette, together with superhero characters, made their rounds to meet visitors and pose for photographs. There were also live-band performances by The Band of the Pacific from the US Air Force.

A version of this article appeared in the print edition of The Sunday Times on February 16, 2020, with the headline Aerial displays wow aviation buffs. Subscribe