DPM says people should have different ideas and debate them, but agree on decision afterwards

Instead, what the country needs is a "certain political maturity" in which people are encouraged to come up with different ideas on how to get things done, said Mr Heng, who is tipped to lead the ruling People's Action Party (PAP) and be the next prime minister.

"At the end of the day, the country cannot be going in 10 different directions because then we go nowhere," he said, stressing it is important that energy is not frittered away on disagreements.

"What is important is that having debated the options, we agree - let us do this, or let us do that."

He was responding to Mr John Teo of Malaysian newspaper New Straits Times, who had asked if Singapore's political system needs to evolve into a more adversarial one, with "more team rivalry even within the same party".

Mr Heng said that worldwide, systems that have done well and delivered a better life for their people are those that are prepared to deal with differences, but not in an adversarial way.

"I prefer to be a constructive problem solver," Mr Heng told the eight Malaysian journalists who met him last Saturday as part of a programme to give foreign journalists a sense of key policies in Singapore. "If there are problems, let us work together to see how best we can solve them, in as constructive a way as possible, that can meet the needs of as many people as possible."

"And if there are differences that we cannot agree on, we should set them aside and say, let these differences not impede us from cooperating closely to achieve things that we can achieve. I think that is a more practical way," he added. 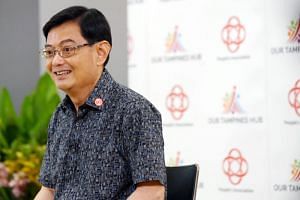 It is one in which every Singaporean feels that this is a country where he can realise his potential and fulfil his aspirations, Mr Heng said. To this end, the Government emphasises education, job creation and economic transformation. It also ensures that seniors' healthcare needs are met through schemes such as the Pioneer and Merdeka Generation packages.

On the regional front, he underlined the importance of working with other Asean members to achieve economic progress.

The regional grouping has brought peace and stability to the whole region, and all member countries have grown economically, he said.

Asked for his thoughts on being poised to take up the mantle of prime minister in the future, Mr Heng said that his focus is, at present, on restructuring the Singapore economy to catch up with global changes.

"Our term of government is up to April 2021. We want to make the best use of the time to ensure that we deliver on the policies, and that we can help to improve the lives of our people over this period," he added.

On how Singaporeans can treasure their racial and religious harmony, Mr Heng replied that they must celebrate diversity and promote deeper understanding among different faiths.

"For instance, in the area of religion, I think it is important for us to respect what each of us believe."

He highlighted that Singapore has laws on the maintenance of religious harmony, and that lea-ders from the Inter-Religious Organisation meet regularly to discuss what can be done to promote deeper understanding.

"And, of course, we must start young, in our schools," he said. "Because when our kids go to school and they interact with people from different faiths, they must learn to appreciate that diversity."