When she auditioned for The New Paper New Face three years ago, Tess Smolens made it through the first round only.

Then 14, she went to the United States, where she joined several talent competitions. With newfound experience and training, the 17-year-old returned to Singapore and took part in New Face this year.

Last night, the actress-model was crowned the winner of The New Paper New Face 2018.

She won $10,000 in cash, $2,000 worth of hair services from Kelture Salon and an exclusive feature in Cleo magazine.

It proved to be a night for young winners, as Jane Fernandez, 18, was first runner-up, while Cheri Teo, 16, was second runner-up.

The New Paper New Face 2018 is the 26th annual run of TNP's signature event, and the finals were held at the packed Bugis+ Atrium yesterday evening. 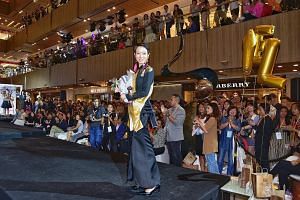 Supporters and members of the public filled the area around the atrium and watched from the floors above.

The 15 New Face finalists strutted down the runway dressed to the themes of desert rose, cabana glam and offbeat chic, drawing applause and deafening cheers.

Several supporters held up signs and placards as they cheered for their favourite contestants.

The crowd was also entertained by singers Marc Than and New Face alumnus Hashy Yusof, who performed several duets together.

For Tess, an American, it has been a long road back.

When she was in Los Angeles two years ago, she was scouted to compete in child talent showcase Premiere, where she placed second.

She also signed with an acting agent from The Savage Agency and talent manager Jackie Reid, and even trained with a Hollywood acting coach.

She also took part in talent competition iPop in Los Angeles, after which she received more than 40 callbacks from acting and modelling agents and managers.

Speaking to TNP fresh from her win, Tess said her family members have been her greatest support.

Her father is a sales director and her mother is a housewife.

"Hearing my dad say 'go Tess' while I was walking the runway really pumped energy into me," she said.

"My family, especially my sister, have been so supportive."

Her sister, 16-year-old Kaitlyn Smolens, was going through her chemistry notes before and after the show.

She is taking her O-level chemistry paper today.

But during the show, when Tess appeared on the runway, Kaitlyn was seen cheering her sister on enthusiastically.

New Face alumnus Julie Tan, who is an actress and entrepreneur, and was a judge yesterday, said she sees Tess doing acting as well as modelling, for both fashion spreads and the runway.

"I love that Tess is so full of energy and confidence, plus she's cute," said Ms Tan.

Mr Wee said: "After more than two decades, The New Paper New Face contest continues to help spot undiscovered talents who may start their journey on our runways, but go on to walk in London, Paris, Milan and other fashion capitals around the world.

"With the strength of the finalists we saw tonight, we hope to be doing this for many years to come."