SINGAPORE - A Singapore submarine lies submerged, listening intently for the tell-tale sound of a target's propellers cutting through the water.

Once its target is found, a well-trained crew can, within minutes, fire a torpedo at it from miles away and remain undetected - a feat which Singapore's submarines has achieved multiple times in naval exercises over the years, even with established navies.

Other than being able to take out targets stealthily, they are able to stay submerged for weeks at a time, perform reconnaissance missions, and take part in exercises as far as in the Andaman Sea - more than 1,400km from Singapore.

To prepare for such missions, submariners go through tough physical and mental training, such as being blindfolded to simulate working in a darkened environment, and escape tower training to get away from a submarine in emergency situations.

The Republic of Singapore Navy (RSN) gave a rare look into the training of its submarine crew ahead of the launch of the first Type 218SG submarine by Defence Minister Ng Eng Hen in the city of Kiel, Germany, on Monday (Feb 18).

The first of the four Type 218SG submarines, built by German defence contractor Thyssenkrupp Marine System, will be delivered from 2021.

The RSN has conducted more than 20 years of submarine training and operations since it began acquiring four Swedish Sjoormen-class submarines second-hand between 1995 and 1997, which underwent refurbishment and were named as Challenger-class vessels. 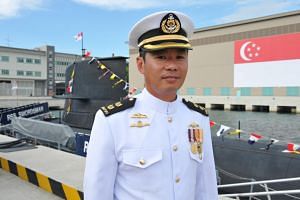 In 2005, it bought and upgraded a pair of Swedish Vastergotland-class submarines that are now called Archer-class vessels.

While details of training improvements leading up to the transition to operate in the Type 218SG were not available, the navy shared how two simulators are used to sharpen a submariner's skills in combat and ship operation.

They are the Submarine Combat Tactical Trainer and the Submarine Steering and Diving Trainer at the RSS Singapura-Changi Naval Base's Submarine Training Centre, which was launched in 2015.

For the Type 218SG, the RSN is also developing a Submarine Trainer Suite, which will include simulators such as the Command Team Trainer and the Steering and Diving Trainer to qualify submariners in realistic conditions.

Submariners currently go through a nine-month course, which the navy is hoping to shorten to six months, with the use of virtual technology.

The passageways within the ship are less than a metre in width, with a total living space of less than a three-room Housing Board flat for the crew of 28, he said.

To sharpen individual and team skills and endurance, the combat trainer allows the command team to practise working together to build up an accurate picture of the surrounding vessels.

This is done through listening to the noises made by the propellers of different vessels. Using sonar, surrounding ships can be identified and classified, such as whether they are a merchant ship, a warship or another submarine.

The steering and diving trainer allows the practising of the diving and manoeuvring procedures of the submarine.

Such training is especially important when the submarine needs to operate in shallow waters - typically up to a depth of 70m - around Singapore, with heavy maritime traffic.

"In the Five Power Defence Arrangements exercise, our submarine could not be detected by other ships, and in the bilateral exercise with India, we successfully fired a torpedo in the Andaman Sea," he said.