Dr Winsemius played an integral role in Singapore's growth as the Government's chief economic adviser from 1961 to 1984.

His children's presence underscored how the diplomatic relationship between Singapore and the Netherlands also has a very personal dimension, said visiting Dutch Prime Minister Mark Rutte.

He highlighted the strong ties between the two countries in a toast at an official lunch at the Istana yesteday hosted by Prime Minister Lee Hsien Loong.

Both Singapore and the Netherlands also cooperate in water management - whether on the issue of water scarcity for Singapore or floods in the Netherlands - and have turned water from a foe to a friend, said Mr Rutte, who is in Singapore on a one-day official visit. 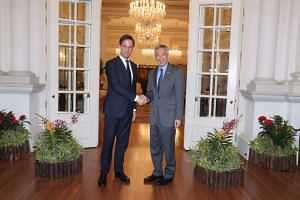 The two countries have a win-win partnership, he added.

Dutch companies are keen to cooperate further in innovation and research and to come up with fresh solutions to global challenges like climate change, he said.

"It is not just a necessity, but with a good friend like Singapore, it is also a pleasure," Mr Rutte added.

PM Lee too had warm words for the Netherlands, highlighting historical ties between them. Economic ties are strong as well, with both working closely in many areas including business, education, defence and the environment.

It is also Singapore's third-largest trade partner in the European Union. About 1,300 Dutch companies operate in Singapore.

A version of this article appeared in the print edition of The Straits Times on November 25, 2016, with the headline 'A personal aspect to S'pore and Dutch ties'. Subscribe
Topics:
More
Whatsapp Linkedin FB Messenger Telegram Reddit WeChat Pinterest Print Purchase Article Copy permalink