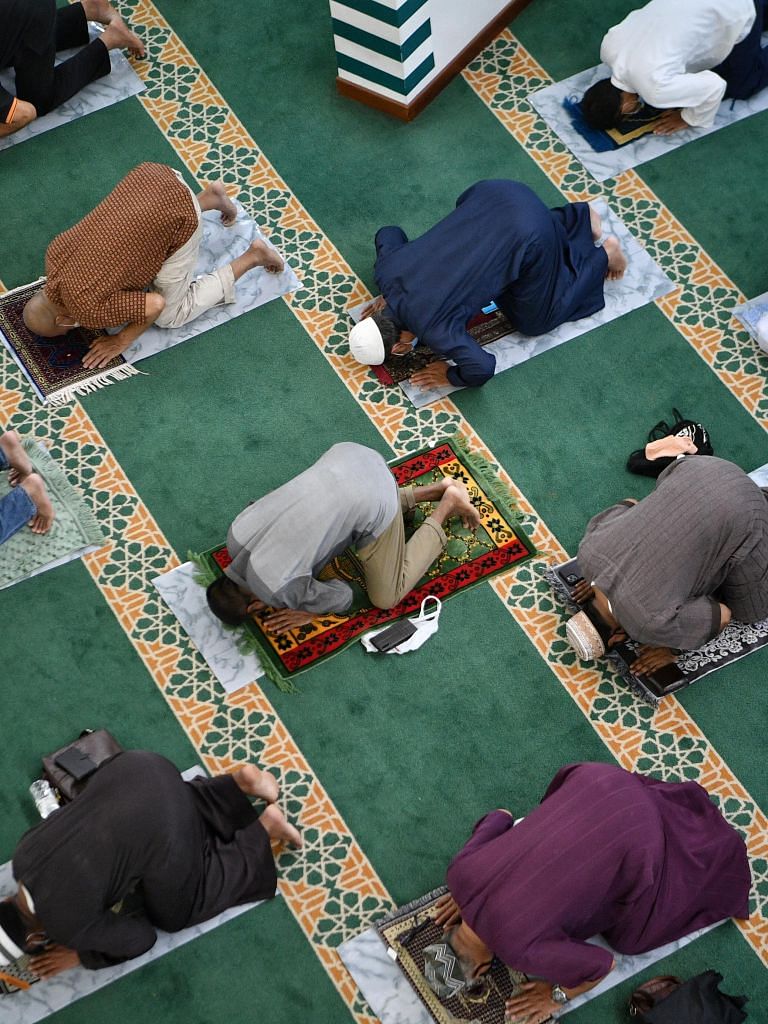 SINGAPORE - Muslims are observing their second Ramadan in the grip of the Covid-19 pandemic.

But some essential activities like nightly terawih prayers and porridge distribution returned this year, restoring some familiarity to how the fasting month was marked prior to the pandemic.

Last year, mosques were closed during Ramadan because of Singapore's circuit breaker to stem the spread of Covid-19.

Since they re-opened in June, mosques have been taking extra measures like disinfecting their compounds in between congregational prayers and ensuring that worshippers have a valid booking to facilitate contact tracing. These practices continued throughout Ramadan this year.

He said: "I help out at the mosque about three to four times a week during Ramadan. I balance volunteering with my school work."

Syafiq helps with sanitising the prayer halls before and after congregational prayers and preparing light refreshments for worshippers breaking their fast, and serves as an usher for up to 250 of the faithful performing terawih prayers each night.

This was before the Islamic Religious Council of Singapore (Muis) announced a reduction in the number of worshippers allowed in mosques for each congregational prayer session from May 8, from 250 to 100.

The customary distribution of porridge to the public has also returned at mosques and some community centres.

Outside Ghufran Mosque in Tampines on April 24, a queue formed before the porridge distribution, which started at 5pm. Mosque volunteers and staff were present to enforce social distancing.

As part of the effort to reach out to more people, Ghufran Mosque distributes almost half of its daily porridge portion at Our Tampines Hub (OTH), which is next to the mosque.

Muslim migrant workers living in dormitories have also been able to organise their own terawih prayers.

When The Straits Times visited Westlite Kranji Way Quick Build Dormitory (QBD) on Thursday (April 29), several residents were mopping an open court after heavy rain to prepare for their terawih.

There are about 600 Muslim residents at Westlite Kranji Way, but only 40 people can perform prayers at a time due to space constraints.

In Bangladesh, Mr Foridshek led up to 150 worshippers in prayer.

"I feel very honoured that my friends in this dorm trust me to lead them," he said.

More than 7,760 families in S'pore to receive help through Ramadan disbursement

Correction note:  A previous version of this story misstated the name of Westlite Kranji Way Quick Build Dormitory. We are sorry for the error.