Mr David Hoe, 27, wants to teach at an elite junior college, but not for the reasons you might think.

He said: "Whether you like it or not, these are the people who will be your policymakers... if they're going to run Singapore, they need to have a better perspective of what Singapore is like."

Mr Hoe knows something about perspective, having traversed the spectrum of the education system.

As a child, his ambition was capped at being a chicken rice seller. But he graduates this month with honours in economics from the National University of Singapore (NUS). 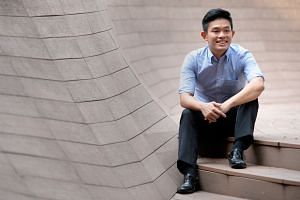 How David Hoe fought his way to university

After his parents divorced and his mother went blind, he spent his primary school days guiding her through the streets to sell tissues. She died of a stroke when he was 12, and he went to live with his father and older brother.

With little time or inclination to study, he did poorly in the Primary School Leaving Examination and landed in the Normal (Technical) Stream. It was only when he discovered he had a knack for grasping mathematics formulas, and started helping his friends understand them too, that he developed a taste for educating others. 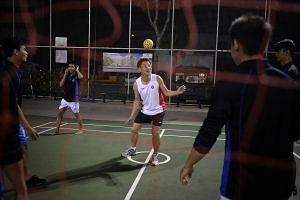 Award for Singaporean who inspires the nation

He fought for a transfer to the Express stream, becoming the first student to make the switch. He also carved a path for himself through junior college to NUS, which he attended on a Ministry of Education scholarship.

This year, he helmed the "I Am Talented" programme, which gave about 200 Normal stream students the chance to pursue their passions, like fashion design.

He also served in a multi-agency government task force to tackle the growing problem of drug abuse among youth.

He met The Straits Times fresh off a flight from South Africa, where he had gone backpacking for nearly two months.

Mr Hoe wanted to visit the places he had known only as case studies. He said: "Economics can seem quite dry. I want to show my kids what hyper-inflation really looks like in Zimbabwe, what corruption looks like in South Africa."

In Coffee Bay, one of the poorest parts of South Africa, he spent five days at an orphanage where the children ate two-month-old expired food. Concerned that they could not study at night because there was no electricity, Mr Hoe made a Facebook appeal for funds. He raised $2,450 to buy solar panels for the orphanage, with enough left over to cover some expenses.

"I never wanted to change the world," said Mr Hoe. "But when I see a need, I will meet it."

A version of this article appeared in the print edition of The Straits Times on July 13, 2015, with the headline 'A head for figures, a heart for others'. Subscribe
Topics:
More
Whatsapp Linkedin FB Messenger Telegram Reddit WeChat Pinterest Print Purchase Article Copy permalink