With 165 years of history, it is no surprise that attending the Convent of the Holy Infant Jesus (CHIJ) has become a family tradition in some Singaporean households.

Take the case of 64-year-old Vimala Alexander. Four generations of her family have received an "IJ education" at the Catholic girls' school, which marked its 165th anniversary with a celebration at the National Stadium yesterday.

It started when her grandfather, who had been widowed, enrolled her late mother Regina Pillay as a boarder at CHIJ Victoria Street (the predecessor of CHIJ Toa Payoh) in the 1930s.

Mrs Alexander, a retired master teacher, said: "My mother, a pious Catholic, who studied there with her two sisters, later enrolled my two sisters and me into the same school because she believed in a strong Catholic education. She was very convinced that education in the Convent could help us not just academically but also spiritually."

Both Mrs Vimala Alexander and her granddaughter Shalome attended CHIJ's celebration yesterday. The event drew 18,000 students, past and present, and included a thanksgiving mass led by Archbishop William Goh.

On choosing the CHIJ route for her daughters, Mrs Vimala Alexander said: "I wanted a holistic education for my daughters - to think critically, speak eloquently, have a strong moral compass, yet at the same time, have a sense of empathy for others. To me, an IJ education embodies this." 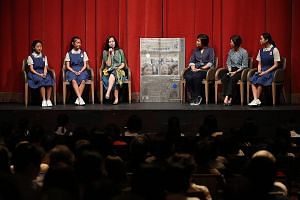 In 1854, four nuns from the Congregation of the Holy Infant Jesus in France arrived in Singapore by sea, at the behest of Father Jean-Marie Beurel, a French Catholic missionary in Singapore, who saw an urgent need for girls' education here.

Within 10 days, the missionaries established the first CHIJ school, as well as an orphanage and boarding house, in Victoria Street. Since then, the CHIJ family has grown to 11 schools.

Sister Maria Lau, the head of the Infant Jesus Sisters in Singapore, said: "It is fitting that the CHIJ schools and mission celebrates its 165th anniversary in the same year that Singapore commemorates its bicentennial.

"The first IJ nuns arrived in Singapore and started CHIJ Town Convent in Victoria Street just 35 years after Raffles landed in Singapore. And even as far back as then, the IJ sisters have been at the forefront of gender equality, women's empowerment and girls' education, for the good of society."

A version of this article appeared in the print edition of The Straits Times on May 29, 2019, with the headline 'A 'family get-together' to celebrate 165 years of CHIJ tradition'. Subscribe
Topics:
More
Whatsapp Linkedin FB Messenger Telegram Reddit WeChat Pinterest Print Purchase Article Copy permalink