At an appreciation ceremony at Institute of Technical Education (ITE) College Central where Merdeka Generation Package welcome folders were given out to 300 Singaporeans born in the 1950s, PM Lee, who is himself part of the Merdeka Generation, said: "We grew up in the early years of independence.

"We travelled with Singapore from third world to first. We helped build this nation and make Singapore a successful little red dot."

PM Lee, who was born in February 1952, said the path was not always straight and level.

"We weathered several economic crises, and workers experienced dislocation and uncertainty as we transformed the economy and upgraded the workforce," he added.

In total, about 8,300 Singaporeans received their welcome folders on Sunday at community events held around the island.

The package includes top-ups to the Medisave accounts of those who are eligible, as well as outpatient subsidies at Community Health Assist Scheme (Chas) clinics, among other benefits.

Mr Jamil Mohamed Yusoff, who received his welcome folder at ITE College Central, recalled what it was like then.

He was 28 in 1978, and a year into his marriage with a new baby as well, when was told he was to be retrenched.

Oil prices had spiked, pushing Singapore and the world into recession. The knock-on effect hit Mr Jamil's job as a machine operator at Times Printers, where he had been working for 10 years.

But he and his wife persevered, and Mr Jamil, now 69, found other jobs.

Today, he is retired and has three adult children and four grandchildren.

He said he has a substantial amount of savings and did not feel he needed the package benefits, but added that he appreciated the recognition for the hard work put in by his generation.

"I missed the Pioneer Generation Package by one year, so I was very glad to hear that the Government is also recognising our generation." 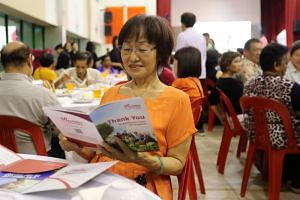 The ceremony on Sunday coincided with the first of 23 Merdeka Generation Roadshows planned for this year.

The roadshows, organised by the Ministry of Communications and Information, are expected to reach about 100,000 individuals, including members of the Merdeka Generation and their families.

They will feature activities, games and performances, as well as booths offering resources and information on active ageing, tips on digital literacy and discounted rates for Sport Singapore's ActiveSG facilities.

Seniors who wish to learn new skills or pick up new interests can sign up for various programmes at the booths. They can also can consult volunteers from the Silver Generation Office on how they can tap the package benefits.

The next roadshow will be held on June 22 at Our Tampines Hub, with more planned for locations in Bukit Gombak, Sengkang, Jurong West, Bukit Panjang and Marine Parade, among others.

More community events are planned for the coming weeks, where Merdeka Generation members will be able to collect their welcome folders in person.

The rest will receive theirs in the mail from late June to end-July.