SINGAPORE - When Associate Professor David Sim took over as the head of the heart failure programme at the National Heart Centre Singapore in 2009, he was the only heart failure specialist and worked almost seven days a week.

This routine went on for five years, till a second specialist came on board in 2014.

"As long as I was not overseas, I would be around every day, including Saturdays, Sundays, public holidays," said Prof Sim, 43.

One of his patients, Ms Diana Tan, 52, credits him for saving her life.

The single mother of three children had ignored her symptoms for 15 years as she felt she could not afford treatment. By the time she consulted Prof Sim in 2015, she had advanced heart failure.

Ms Tan said: "I felt tired all the time and I thought maybe it's better to die, but Prof Sim told me not to give up on my life. I was touched that he would come and check on me every day, sometimes twice a day."

Under Prof Sim's care, Ms Tan's heart ejection fraction - a measure of how much blood in the left ventricle is pumped out with every heartbeat - improved from 15 per cent in 2015 to about 50 per cent today. 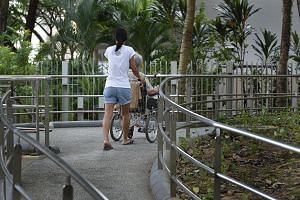 Singapore needs to get caregivers back to work with more part-time, flexible options, says Heng Chee How

Things are looking up for the medical profession. Really.

A normal healthy heart has an ejection fraction of between 50 and 70 per cent, Prof Sim said.

The specialist was one of 83 people recognised at the 16th Healthcare Humanity Awards held in Orchard Hotel on Thursday (April 25), organised by the Courage Fund.

The fund was launched in 2003 to raise money for severe acute respiratory syndrome (Sars) patients and healthcare workers.

The annual event pays tribute to healthcare workers, caregivers and volunteers who go the extra mile to care for the sick and elderly, said Madam Kay Kuok, who chairs the Courage Fund and the National Healthcare Group.

"Their care not just uplifts but also empowers and influences their charges to take better care of themselves and to live well," she said.

Ms Serlina Eng, 44, a senior case manager at the Institute of Mental Health (IMH), was another award recipient.

Besides providing counselling and case management for patients, she also started an initiative at IMH called The Hut, a drop-in centre that offers a safe space for patients, staff and the public to interact casually.

Ms Eng has also raised over $10,000 for various charities by running ultramarathons, with the most recent being a seven-day 250km race through the Gobi Desert in Mongolia.

She said: "I'm very honoured to receive this award. This will inspire me to push myself even further, especially in helping others and in patient care."

Programme aims to encourage youth to do volunteer work

Mr Lim Kim Seng, who has been volunteering at the Singapore Disability Sports Council's sailing programme since 2007, was one of 10 recipients who received an honourable mention, the award's highest accolade.

Every weekend, Mr Lim, 58, spends his time helping sailors with physical disabilities in and out of the sailboats, assisting them in rigging the sails and washing the boats afterwards.

An avid sportsman who has done dragon boating and triathlons, Mr Lim has a disability of his own. When he was three years old, an accident left him deaf and unable to speak.

"I want to motivate young disabled athletes to be more confident. Many of them feel inferior because of their disabilities. I want to help them boost their confidence through sports," said Mr Lim in sign language.

His son, navy serviceman Jaryl Lin, 23, was at the event and acted as his interpreter.

At the ceremony, Health Minister Gan Kim Yong and President Halimah Yacob, who was the guest of honour, gave out the awards.

Each of the recipients received a medal and a cash award of $1,500. Those who received an honourable mention got an additional $500.