SINGAPORE - In her free time, retiree Nancy Quek, 80, would spend hours in the kitchen experimenting and fine-tuning her own recipes.

It is no wonder that her family would often look forward to eating her home-cooked meals.

"I feel very contented when they enjoy what I cook because I take a lot of trouble to prepare and cook the dishes," she said, adding that it is a privilege to cook for her family. "Seeing them happy, I will also feel happy."

The octogenarian was among the grandmothers and mothers who flexed their culinary muscles at a cooking competition. The top two home recipes would be used to create ready-to-eat bento meal boxes for sale through food vending machines.

The cook-off, organised by ready meals manufacturer JR Group, was among a series of activities that took place on Sunday (May 13) to celebrate Mother's Day.

Madam Quek, who has three children and six grandchildren, won second place at the contest at JCube mall with her chicken roll recipe, which was inspired by her late mother.

"I spend a lot of time experimenting and I love cooking," said Madam Quek, whose recipe will be used to create ready meals. "This is definitely a dream come true for me."

Senior Minister of State for Health and Environment and Water Resources Amy Khor, who attended the event, said: "Mothers often express their love for the family through thoughtful meal choices and conversations over the dining table. 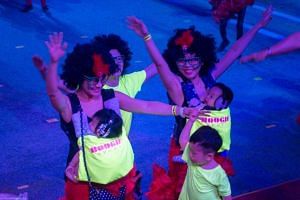 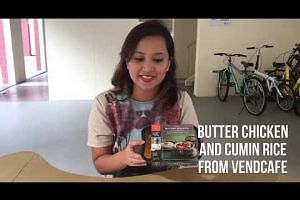 "As a mother myself, I'm happy to see families coming together to encourage and support their mothers through this cooking contest, sharing stories and fond memories as they recall the heritage of these home recipes."

Several events elsewhere in Singapore were also held in conjunction with Mother's Day. These included a concert held for beneficiaries from 40 voluntary welfare organisations at the Esplanade and an event where the public got a taste of life in a kampung house in Pulau Ubin.

In celebrating the occasion, more than 1,000 people also took part in a 1.5km walk which went towards helping women from underprivileged families gain new skills and increase their employability.

The event, which was attended by Minister for Social and Family Development Desmond Lee, was organised by People's Association Family Life Champions and Muslim welfare organisation Jamiyah Singapore.

Some 100 beneficiaries will be able to attend personal development and skills-based courses offered by both organisations for free. The courses, to be held at Geylang West Community Club between June and August, include career-readiness and repair hacks.

Jamiyah president Mohd Hasbi Abu Bakar said: "When less-privileged women apply the knowledge they learn to rebuild their lives, they will feel a stronger sense of ownership over their lives. It will also boost their confidence, and increase their chances of being gainfully employed."