Adult Singaporeans who are eligible for a one-off SG Bonus of up to $300 will be informed of their payout amount in a letter from Tuesday.

The Government will disburse $700 million to the 2.8 million eligible Singaporeans by December, the Ministry of Finance (MOF) said in a statement yesterday.

Citizens can use their SingPass to view their SG Bonus benefit on the SG Bonus website, which will be accessible from Tuesday.

Those who have registered their mobile numbers with SingPass will also receive SMS notifications.

Finance Minister Heng Swee Keat said in this year's Budget speech that the bonus comes with an expected overall Budget surplus of $9.6 billion, or 2.1 per cent of gross domestic product, for the 2017 financial year.

The surplus was markedly higher than the $1.9 billion forecast a year ago, mainly because of exceptional statutory board contributions of $4.6 billion.

The SG Bonus will be given on top of the Goods and Services Tax Voucher scheme, and service and conservancy charges rebate for eligible Singaporeans.

This reflects the Government's longstanding commitment to share the fruits of the country's development with Singaporeans, said MOF.

Those who are 21 years old and above on Dec 31 will receive up to $300, depending on their income.

Most Singaporeans will automatically get their SG Bonus if they have previously signed up for other payout schemes, such as the growth dividends and GST Voucher.

Singaporeans who have not signed up will be informed of how to do so in their letters.

They will have until March 31 next year to sign up online, or through a hard-copy form available at community clubs and Central Provident Fund Board service centres. 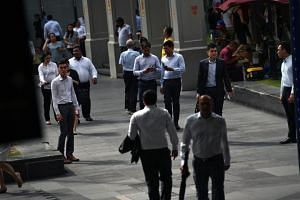 Adult Singaporeans to get SG Bonus of up to $300 after $9.6b budget surplus

Those who sign up by Nov 7 will receive their SG Bonus by December.

Singaporeans will also have the option of receiving the payout via PayNow. This will allow them to receive the money in their bank accounts using their NRIC or mobile number without having to disclose their bank account details.

The Government will be using PayNow as the payment mode for citizens who register their NRIC on PayNow by Nov 7. They will receive their SG Bonus by Nov 30 instead of December.

Those who choose not to register their NRIC on PayNow will receive their SG Bonus via direct bank crediting or cheques.

MOF said it has received some feedback from Singaporeans who want to donate their SG Bonus to needy citizens. They will now be able to do so via the SG Bonus website or the SG Cares mobile application.

Details on the SG Bonus can be found at www.singaporebudget. gov.sg/sgbonus

Information on other benefits announced in Budget 2018 is available at www.singaporebudget.gov.sg

The public can also send an e-mail to contactus@govtopup.gov.sg or call 1800-222-2888 for more information.

Correction note: An earlier version of this article said those with an assessable income of $28,000 and below last year will get $300. It should be for the 2017 year of assessment. We are sorry for the error.

A version of this article appeared in the print edition of The Straits Times on September 29, 2018, with the headline '$700m SG Bonus to be paid out to 2.8m S'poreans by December'. Subscribe
Topics:
More
Whatsapp Linkedin FB Messenger Telegram Reddit WeChat Pinterest Print Purchase Article Copy permalink