SINGAPORE - Dr Huang Jing, a prominent academic from the Lee Kuan Yew School of Public Policy, had his permanent residency cancelled on Friday (Aug 4), for working with a foreign government to influence Singapore's foreign policy and public opinion here.

The Ministry of Home Affairs announced that Dr Huang and his wife Shirley Yang Xiuping, who are United States citizens, will be permanently banned from Singapore, in what is the first publicly known case of its kind in nearly two decades.

Here are seven things about the academic:

1. Dr Huang is an academic known for his expert views on China's politics and foreign policy, as well as United States-China relations.

2. Until the ban, Dr Huang, who was born in 1956, was the Lee Foundation Professor on US-China relations at the National University of Singapore's Lee Kuan Yew School of Public Policy (LKYSPP), where he also headed the Centre on Asia and Globalisation.

3. His curriculum vitae, available on the LKYSPP's website, chronicles a long list of achievements in academia and the study of international relations.

He has authored three books and many journal articles, book chapters and policy papers on China's politics, development strategy and foreign policy, as well as US-China relations, China's military and security issues in the Asia-Pacific. 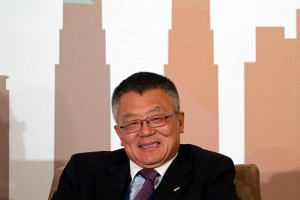 His book, Factionalism In Chinese Communist Politics, published in 2000, won the Masayoshi Ohira Memorial Prize that is awarded to authors of books in politics, economics, culture and technology.

The prize is named after a former Prime Minister of Japan, who led the country from 1978 to 1980 and is known for paving the way for the normalising of Japan's relations with China.

4. Dr Huang, a US citizen who received his PhD in government from Harvard University in 1995, spearheaded a number of projects while at the LKYSPP.

These include a consortium studying the development of Russia's far east, an effort that involves leading think-tanks from such countries as Russia, China, Japan and Singapore.

He also chaired projects studying China-India relations, and the energy policies of China, Japan and the US.

5. Dr Huang is also a frequent commentator in the Singapore media - including The Straits Times and Lianhe Zaobao. His latest commentary for The Straits Times, published in June, was on the interdependence of US and China.

6. Besides his academic work, Dr Huang is also on the board of several organisations, including Keppel Land. He is also on the steering committee of the NUS Research Institute in Suzhou.

Correction Note: In an earlier version of the story, we reported that Dr Huang had lectured at Harvard University from 2013 to 2014. He has clarified that he lectured there from 1993 to 1994.