SINGAPORE - The seven fridges left outside a corridor in a Housing Board block in Simei have been removed, the town council told The Straits Times on Wednesday (Dec 20).

A neighbour, who gave her name as Madam Shen, had complained about the large appliances left along the corridor at Block 136, Simei Street 1, Shin Min Daily News said in a report on Tuesday.

Madam Shen, 48, said the clutter was a fire hazard.

A spokesman for the East Coast-Fengshan Town Council told ST that they were aware of the issue.

She added that the town council served a notice immediately after the complaint was lodged on Monday.

"We requested the resident to remove the items by the next day, which she complied with," she said. "We appreciate her prompt cooperation as it affects fire safety."

The town council said it was working closely with the Singapore Civil Defence Force on fire safety and would appreciate if residents could be more considerate, especially during the year-end festive period and the upcoming Chinese New Year.

"The town council offers free disposal service for up to three bulky items per month per unit," said the spokesman. "We encourage residents to engage us directly regarding similar issues so that we can better assist them." 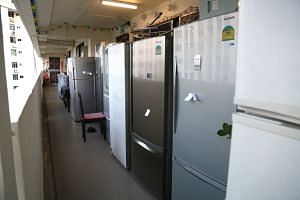 The refrigerators had belonged to the female boss of a moving company, who said she had placed them there as there was a hole in the ceiling of her warehouse.

She was afraid rainwater would seep through the hole and damage the appliances, and so moved them to the corridor temporarily.

There must be a clear pathway at least 1.2m wide along common corridors.

Items that cannot be easily folded or removed in times of emergency so that they do not obstruct the escape route cannot be placed along the common corridor.