SINGAPORE (THE NEW PAPER) - Sixty travel agencies have closed so far this year, even before the end of the first quarter.

If the trend continues, the figure will surpass 200 by year-end, spelling more gloom for an industry that is evolving at such a pace that it has seen nearly 680 casualties since 2013.

There are 1,169 agencies still operating.

Reasons cited by industry players include changes in consumer travel habits and the increased presence of online booking websites such as Trivago and Expedia.

While large agencies seem better equipped to stay the course, the smaller players are finding it much harder to stay afloat.

The Singapore Tourism Board (STB) told The New Paper that as the industry evolved, traditional agents are being hit by online platforms, which typically offer cheaper prices.

Its director of travel agents and tourist guides, Ms Ong Ling Lee, said: "(Travel agents) are being disintermediated as it becomes easier for customers to buy travel products directly."

The last two years have been even worse, with a total of 290 closures.

An STB spokesman said about 100 to 120 travel agencies close every year. Most of these are orderly closures or businesses which let their licenses expire for reasons like retirement or change in business focus.

The STB spokesman added that the rate of new agencies opening and business exits has remained "fairly constant" over the years.

The Consumers Association of Singapore (Case) agreed that tech-savvy consumers prefer to book their flights and hotels online.

But its executive director, Mr Loy York Jiun, added: "It is also possible the closures could be due to business failure (in other areas).

"For example, it was reported that Asia-Euro Holidays had closed down due to financial woes after its various property investments failed."

Industry expert Chew Kian Beng said most of the 60 closures this year were small- and medium-sized agencies that were less than three years old.

Mr Chew, who is section head for Temasek Polytechnic's diploma in hospitality and tourism management, told TNP: "They may have lacked experience, unique offerings and customer base to cope in the fast-changing landscape."

Ms Alicia Seah, Dynasty Travel's director of public relations and communications, said it has remained profitable because of customer loyalty.

She also said travel agencies must leverage on technology to improve service, efficiency and market reach.

Chan Brothers Travel also relies on brand recognition, extra services and use of tech to get repeat business.

Apart from online transactions, the agency also offers semi tours combining the convenience of a package tour and the flexibility of a free-and-easy holiday. 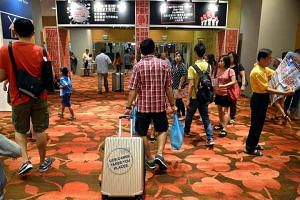 "But we provide added services, such as a 24-hour emergency hotline that those who are not part of a tour group can call."

LGE Travel managing director Ken See said: "We do not do a lot of advertising and publicity, so we rely a lot on word-of-mouth and return customers."

Specialising in Europe tours, it also tries to offer unusual itineraries such as its Northern Lights package, a 12-day tour to Finland, Sweden and Norway.

But Mr See was concerned how the spate of closures, which invariably leaves customers in the lurch, will affect the reputation of the industry, with lesser-known agencies taking the biggest hit.

He said: "Customers become more wary of travelling with lesser-known agencies because they fear losing their hard-earned money."

Undergraduate Emerik Viriya, 21, said that while he uses both brick-and-mortar agencies and websites, he prefers the latter.

He said: "I feel online platforms like Trivago are more transparent with pricing.

"I can compare different deals and find something that has the best value for money."