When he was 12, Private Clement Chin was so passionate about computers that he was creating his own program to strengthen his in-game character in online role-playing games.

And when the Cyber NSF Scheme was introduced to tap the talents of full-time national servicemen (NSFs) for cyber defence, Pte Chin, 23, jumped at it.

It was "an obvious choice'' for the graduate from Singapore Polytechnic's Infocomm Security Management programme to apply for the Cyber Specialist Award.

"In this field, technology progresses very fast, and you can't just stop honing your skills for two years. If I went in as a 'normal' NSF, I might have to pick up from where I left off before I joined the army," he said.

Pte Chin is in the pioneer cohort of 59 NSF cyber specialists who began their 35-week course in December, said the Defence Ministry (Mindef).

They are being trained at the Cyber Defence School at Stagmont Camp in Choa Chu Kang.

So far, they have completed foundational modules such as on computer networks, and Web systems and technologies, said Mindef.

The batch has quite a substantial amount of knowledge in this field, as most of them have been through three years of relevant studies in the polytechnics.

CAPTAIN FUJI NEO, 30, a trainer at the Cyber Defence School, which also has external trainers.

They will also study full-time at the Singapore Institute of Technology (SIT) for 15 weeks during this training period before graduating as full-fledged specialists in August.

Upon earning their ranks, they will perform advanced cyber roles for Mindef and the Singapore Armed Forces such as in incident response and testing for security weaknesses in IT infrastructure and applications.

Even after they are deployed, they will go for weekly lessons at SIT - the first time NSFs can attend academic courses while employed in an operational role - to help them better perform their duties.

More details of the cyber specialists' training regime were shared for the first time at a media visit to Stagmont Camp last Wednesday.

That day, Mindef said it was looking to recruit some 300 regulars for two new cyber expert schemes under the military expert and defence executive officer schemes.

In recent years, Mindef has unveiled a number of measures to boost cyber security, such as the move to set up the Defence Cyber Organisation in 2017, after the theft of personal data of 850 national servicemen and Mindef employees in February that year.

The pioneer group of cyber specialists, all former polytechnic students, enlisted and completed their basic military training in the second half of last year. They were picked from about 250 applicants who sat a four-hour selection test last year. 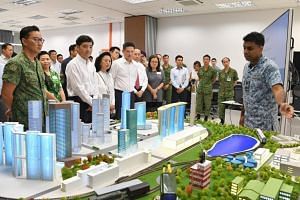 As commanders, they also have to complete leadership training.

Captain Fuji Neo, 30, who is a trainer at the Cyber Defence School, which also has external trainers, said: "The batch has quite a substantial amount of knowledge in this field, as most of them have been through three years of relevant studies in the polytechnics," he said.

He said 58 of them have cyber-security-related qualifications, such as diplomas in information technology from Nanyang Polytechnic. The one exception has a diploma in mechatronics.

Mindef introduced the Cyber NSF Scheme in February last year to tap cyber talents with the required aptitude and skills from NSFs.

It is now working with other local and overseas universities to recognise the NSFs' academic credits from SIT, which will expand the range of universities at which they can complete their future studies.

About two-thirds of the specialists have chosen to serve four years in uniform, while the remaining ones are on the three-year scheme. They will earn regular service pay after first completing a minimum period as NSFs.

There have been about 100 applications for the second intake, who will enlist in the first half of this year.