SINGAPORE - A 58-year-old woman died after an industrial accident involving a material hoist in Admiralty on Monday (June 25).

According to Thyme Food and Services, the catering company she worked for, the accident involved a cargo hoist used to transport goods inside the unit occupied by the firm. The unit is on the seventh floor of the building, a strata-titled food processing facility.

The Singapore Civil Defence Force (SCDF) said they responded to an incident at 8A Admiralty Street at about 4.10pm. The woman was pronounced dead at the scene by an SCDF paramedic, the spokesman said.

In response to queries, a police spokesman said they were alerted to a case of industrial accident at 4.04pm. Police are investigating the unnatural death, the spokesman added.

When The Straits Times arrived at the scene at around 6pm, police officers were seen on the roof, with police cordons around the unit.

An employee at a neighbouring unit, who declined to be named, told ST that her colleague had helped to move a decapitated body after the incident involving a "lift" inside the unit. She added that the "lift" was used by the catering company to transport goods.

At around 8.30pm, the body of the employee was removed from the unit.

Mr Lawrence Hee, 44, a director of the catering company, said that the employee helped with bookkeeping and procurement and was very responsible, often going beyond the call of duty.

The staff member, who had previously worked for Mr Hee’s other wellness company for seven years, joined the catering firm after she was made redundant two years ago. She was married with children and grandchildren, he said.

Mr Hee said that he did not know what she was doing near the cargo hoist in the kitchen. 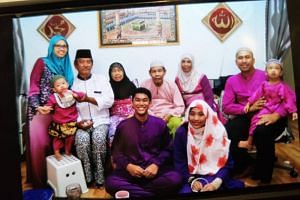 “She would really watch your back and go beyond her normal duties. She shouldn’t be anywhere near the hoist but she went to help with something when the accident happened,” said Mr Hee, who declined to comment on how it happened, citing ongoing investigations.

Choking back tears, Mr Hee said: “She and her husband were very close... I will need to face the family and offer them whatever support they need.”

In response to queries from ST, the Ministry of Manpower said a day after the incident that two workers were operating a material hoist, used to move items between the mezzanine level and the kitchen level below it.

"They were within the hoist when it descended abruptly, causing the workers to fall. One of the workers was caught between the hoist and its landing at the mezzanine level as she fell," the MOM spokesman added.

MOM said it has stopped the use of the hoist and is investigating the incident.

ST has contacted the building management for more information.