SINGAPORE - A 55-year-old woman walking her dog was gored in the leg by a wild boar near Windsor Nature Park on Friday (June 30) night and received 60 stitches for her 10cm-long wound.

Ms Ding Yichun, who is from Taiwan, told Shin Min Daily News in a report on Saturday that she was walking her dog at about 6pm near Windsor Nature Park when a wild boar emerged from the surrounding trees and attacked her.

The 55-year-old housewife said the animal was more than a metre long and had two long tusks.

Said Ms Ding: "I was shocked and could not react in time, so I was hit by the boar and felt a sharp pain in my right leg before falling on the floor."

She said the boar gored her right leg before turning and going back into the brush.

Two maids who passed by came to help her.

Other than the deep wound on her leg, Ms Ding had several abrasions from her fall.

The Singapore Civil Defence Force (SCDF) told The Straits Times on Saturday that it was alerted to the case at 6.55pm on Friday and dispatched an ambulance to Windsor Park Hill.

"A woman in her 50s suffered an open wound on her right calf," said the SCDF spokesman.

She was taken to Tan Tock Seng Hospital where she received almost 60 stitches for her wound, which the doctor said was very deep and needed two layers of stitching.

The stitching took nearly an hour. Ms Ding was kept under observation and left the hospital only at midnight that day.

Ms Ding said she had come to Singapore last month to visit her grandchild and help look after her daughter.

She said the injury has caused her to instead become "a burden" to her family. 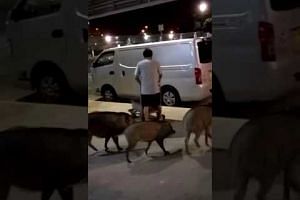 Posters put up after wild boar viral video; AVA warns public not to feed the animals

She said: "I will never go back there for a stroll."

"The animal in this case may have been surprised or felt provoked, causing it to charge," he said. "The presence of the lady's pet dog may have been a reason for the animal to feel provoked as well."

He said wildlife conflict cases "are rare occurrences in Singapore and the location of this particular place is important to take note as Windsor is at the fringe of the nature reserve".

Mr Wong Tuan Wah, group director of conservation at the National Parks Board, told The Straits Times on Saturday that NParks was alerted to the incident along Venus Walk and is investigating the matter.

"NParks advises the public to remain calm and move slowly away from wild boars should they encounter any," he said. "Keep a safe distance from them, and do not approach or attempt to feed them. Ensure that young children and pets are kept away as they may be curious and approach the boars."

He referred the public to NParks' website for more information on what to do when encountering wild boars.

Wild boars are native animals of Singapore that can weigh up to 100kg and live for more than 20 years.

Both the National Parks Board and the Agri-Food and Veterinary Authority of Singapore have advisories on their websites on what to do when encountering a wild boar.

Here are some guidelines:

- Be calm and move slowly away from the animal. Do not approach or attempt to feed the animal.

- Keep a safe distance and do not corner or provoke the animal such as by using a flash while taking pictures of it.

- If you see adults with young piglets, leave them alone. These are potentially more dangerous because they may attempt to defend their young.

Note: This article was amended to clarify that the incident happened at the fringe of Windsor Nature Park and not at the Park.