It aims to help match people with most suitable courses, exceeds its 30,000 target for first year

The one-year-old SkillsFuture Advice programme has surpassed its target, with 50,000 Singaporeans having attended workshops to help them find courses that will boost their skills and career plans.

It details which SkillsFuture courses are available and suitable for attendees to develop their education, training and job prospects.

Each of the five community development councils was expected to reach out to 6,000 individuals in the first year and all have exceeded that goal, said Education Minister Ong Ye Kung yesterday at an event to mark the anniversary of SkillsFuture Advice @ North West.

The North West CDC has conducted 300 workshops and accounted for 10,000 participants since it started the talks in December 2017.

Speaking at Nee Soon South Community Club, Mr Ong said it was apt that for the upcoming Budget, Finance Minister Heng Swee Keat mentioned that he is focusing on economic transformation and helping companies cope with it, especially small and medium-sized enterprises (SMEs). 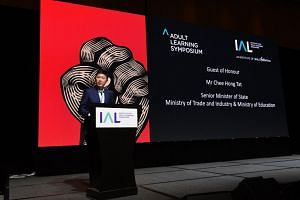 22,000 Singaporeans given a boost in skills training through SkillsFuture Advice workshops

Mr Ong said: "It is important - when we look at SMEs, they make up 99 per cent of all our enterprises, they hire about 65 per cent of all employees, but I think there is still room for SMEs to be more productive. Therefore, we will see how we can use SkillsFuture as a national movement to help upgrade our SMEs."

Among those who benefited from the workshops is Mr Muhammad Syafiq Mohammad Ali, 29. After suffering a stroke in 2015, he lost function of the left side of his body and subsequently his job as a technician.

In 2017, he joined Abilities Beyond Limitations and Expectations, where he underwent rehabilitation. The organisation suggested he enrol in the SkillsFuture Advice programme. "After that, I went for the effective communication course with SkillsFuture and got a job as a telemarketer," he said. "The programme helped me understand my capabilities and apply my skills."

She had worked as a photographer for 32 years before retiring in 2015.

Dr Teo Ho Pin, Mayor of North West District, said a survey of workshop participants showed that 40 per cent have either embarked on a skills upgrading programme or plan to do so. "Indeed it is very encouraging that Singaporeans want to take the opportunity to upgrade themselves," he said.

"By 2020, we hope to conduct at least 1,000 workshops for Singaporeans to empower more residents to better take charge of their skills upgrading and career development.

"It is important that every Singaporean adopts lifelong learning as part of our living habit and continue to learn."