SINGAPORE - The Bicentennial Experience at Fort Canning is opening up 5,000 more slots for Singaporeans and permanent residents, a last chance for all to catch the exhibition before it closes on Dec 31 this year.

Manpower Minister Josephine Teo, co-chairman of the ministerial steering committee for the Singapore Bicentennial, announced on Saturday (Dec 14) that these slots would be opened up on Monday.

The tickets, which are free, will be for the last week of this month (Dec 24 to 31), and will be available for online booking from 8am on Monday.

"As we make the final batch of 5,000 tickets available for the last week of the show, it is our hope that visitors will continue to be inspired by our history and go deeper to explore the various milestones and events of our past," said Mrs Teo.

Mrs Teo also welcomed on Saturday the exhibition's 700,000th visitor, making the Bicentennial Experience one of the most well-visited exhibits on Singapore history in recent years.

It was earlier reported that the Singapore Bicentennial Office initially expected 300,000 visitors for its three-month run from June 1 to Sept 15, but that number was surpassed on Aug 3. Due to overwhelming demand, the exhibition's run was extended to Dec 31.

Mrs Teo also revealed that parts of the exhibition might be preserved and integrated into a permanent exhibit at the National Museum of Singapore, at a later date.

"We appreciate the many calls for the Bicentennial experience to be made a permanent showcase. We are actively looking into how to preserve its best features," said the minister.

Mrs Teo also encouraged Singaporeans and PRs to visit other Bicentennial exhibitions, like the National Museum of Singapore's "An Old New World: From the East Indies to the Founding of Singapore" exhibition, which looks at the 200 years before the arrival of the British and draws connections between Singapore's history and Europe's.

The Bicentennial's 700,000th visitor, 25-year-old Roger Lim, was at the exhibition with his girlfriend Ms Michelle Liew, 23. Both just graduated from the Lasalle College of the Arts.

Mr Lim said that they booked tickets after hearing good reviews about the exhibitions from their friends. 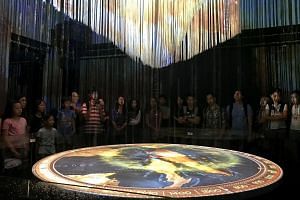 "I really loved the entire experience, it was informational and a nice way of portraying Singapore's history," Mr Lim said.

"My favourite part was Act 5: Destiny, as the indoor rain reminded me of my time serving as a police officer in the National Service during the passing of Mr Lee Kuan Yew," he added.

"I remember it was raining very heavily during the funeral procession and Act 5 brought me back to the sense of unity and pride for our nation that I felt among all Singaporeans."