SINGAPORE - A 47-year-old man has been arrested for throwing a bicycle down from a Housing Board block in Upper Boon Keng Road, the police said on Thursday (June 22).

The bicycle, which The Straits Times understands is an ofo bike, was thrown from Block 11 Upper Boon Keng Road in the early hours of Thursday morning.

ST understands that the bicycle was thrown down from the 15th floor, and that the man appeared drunk and was found sleeping along the corridor of the same floor.

The police received a report on the case at 5.38am and Bedok Police Division officers arrested the suspect on the same day.

The police in their statement said they take a serious view of "such dangerous acts that endanger the lives of others and will take swift action against the perpetrators".

The case is the latest in a series of shared bicycle abuse cases. 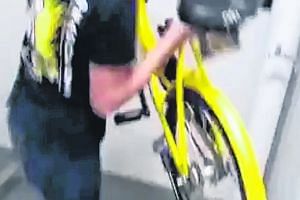 Just last Thursday (June 15), a 14-year-old allegedly threw an ofo bicycle down from the 30th floor of an HDB block in Whampoa.

He was later arrested.

One of them was seen on video throwing a bicycle into a canal and riding another inside Punggol MRT Station.