Reserve is home to 200 plant and animal species previously not found there: Survey

More than 40 of what could turn out to be potentially new species to Singapore have been found following a multi-year survey of the Bukit Timah Nature Reserve, the first such study in 20 years.

Between 2014 and last year, researchers from the National Parks Board (NParks), together with other researchers and volunteers, found around 200 species of plants and animals previously not found in the reserve, including over 40 new ones, some of which may be new to science.

NParks said in a statement yesterday that the discovery points to the "increasing scientific value" of the Bukit Timah Nature Reserve.

"The findings from the survey contribute to the increasing scientific value of Bukit Timah Nature Reserve and show that the reserve should continue to be safeguarded," said NParks.

"In spite of its small size, the reserve is home to a diverse array of biodiversity, with new species continually being discovered."

The species discovered included a six-eyed spider with shiny, hardened and dark-coloured plates over the front part of its body. It has been named after the reserve - Paculla bukittimahensis. 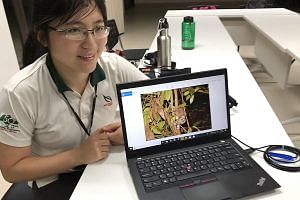 More parks, native species and citizen gardeners, as NParks sows the seeds of a greener city

The group director of NParks' National Biodiversity Centre, Mr Lim Liang Jim, said the reserve is also home to 40 per cent of the spider species and 56 per cent of the mammal species in Singapore.

"So this also shows how fragile biodiversity is in Singapore and how important it is to conserve the Bukit Timah Nature Reserve," he told The Sunday Times.

NParks said the survey showed that the closure of the Bukit Timah Nature Reserve from 2014 to 2016 allowed it to recover as erosion rates were lowered and soil compaction reduced.

But while the discovery of the new animals is encouraging, NParks said that many of them were not found in large numbers, which reflects the fragility of the park and the need to "strengthen the conservation and resilience of the reserve".

One of the ways this is being done is through NPark's Forest Restoration Action Plan, which will see about 250,000 native trees and shrubs being planted in the Bukit Timah Nature Reserve, the Central Catchment Nature Reserve and other parks over the next 10 years.

More than 300 researchers and volunteers took part in the survey, which was supported by HSBC through the Garden City Fund. It is the first comprehensive survey of the Bukit Timah Nature Reserve in 20 years. The last survey was conducted from 1993 to 1997.

Capping off the initiative is the Festival of Biodiversity exhibition at Toa Payoh HDB Hub Mall this weekend.