Online shopping may have had an impact on Housing Board shops. Close to 50 per cent of those who bought items online reported they had shopped less at HDB shops in the latest HDB Sample Household Survey, which is conducted once every five years.

The survey results, released yesterday, showed that about four in 10 HDB residents had made online purchases through websites and mobile applications during the year, with a higher proportion of online shoppers living in four-room or bigger flat types.

The majority of online shoppers were aged 45 years and below, and likely to be from families with young children. Clothing and footwear were the top items purchased online, followed by phones and electronic products.

Associate Professor Lawrence Loh from the National University of Singapore Business School said the question of HDB shops' survival amid the rise of e-commerce is a chicken-and-egg problem.

"The younger people will not turn to HDB shops unless they are upgraded and made upmarket. Yet these shops will not move upwards unless there is a market," he said. "If we want to preserve the HDB shops, if we value the social contribution of these shops, we will need an impetus from the HDB or other authorities."

In a statement, the HDB said heartland shops continued to play an important role in serving the needs of residents, notwithstanding the trend towards online shopping. It said it would continue to support neighbourhood shops to boost their vibrancy and competitiveness through various schemes.

The survey polled about 7,800 households. The HDB said the surveys have provided valuable feedback for the Housing Board to enhance the design of flats, neighbourhoods and estates.

"Going forward, the HDB will continue to keep pace with residents' evolving needs, and lifestyles. We are also studying how HDB flat designs can support developments in the future of work, including trends that may have been accelerated by the current pandemic, such as telecommuting," said a spokesman. 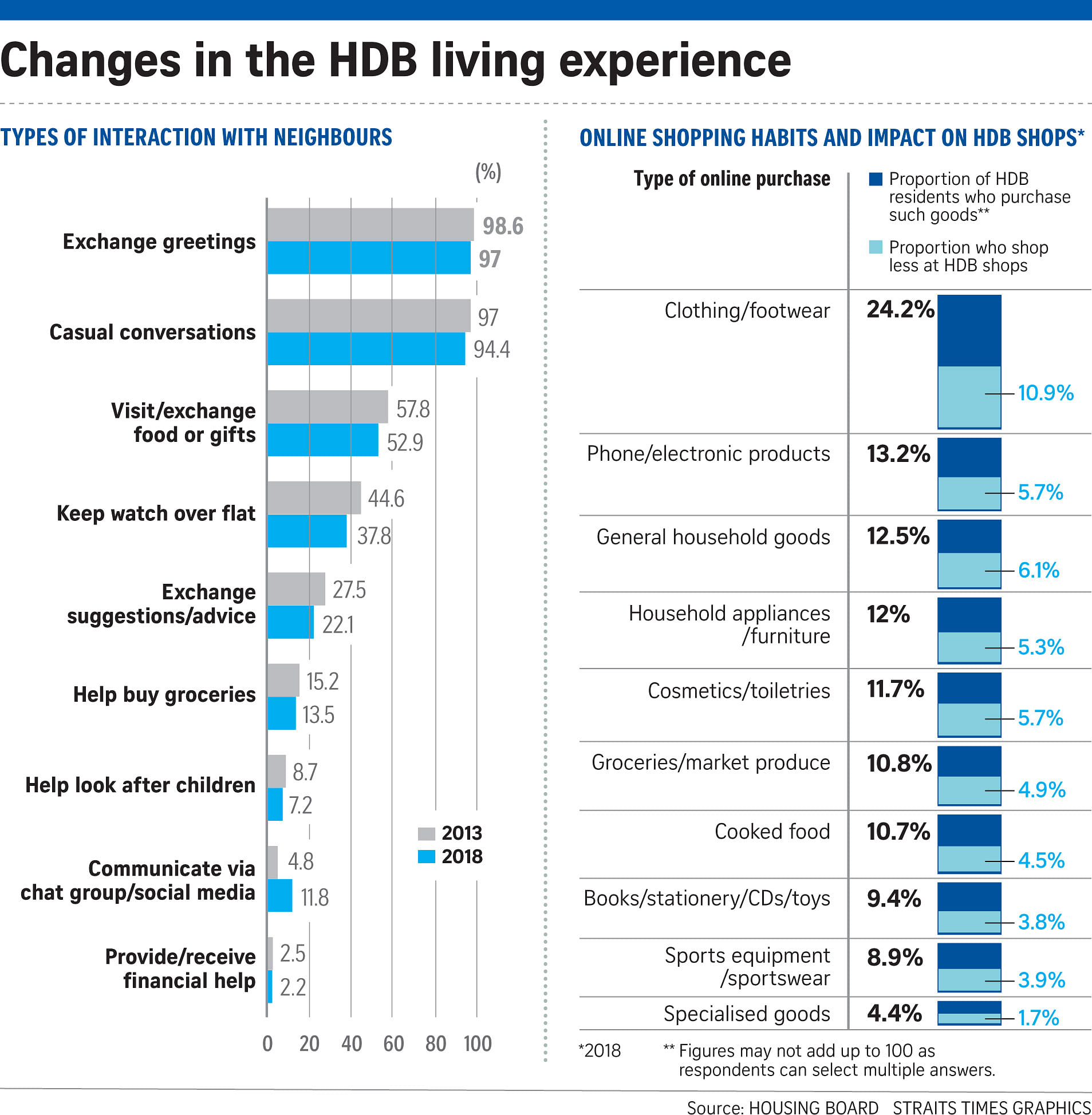 The latest survey showed the proportion of those who exchanged greetings with their neighbours dropped from 98.6 per cent in 2013 to 97 per cent, while the figure for those who indulged in casual conversations dipped from 97 per cent to 94.4 per cent.

Instead, more interacted online. Close to 12 per cent said they communicated with neighbours on chat groups or on social media, compared with 4.8 per cent in 2013.

Participation rates in organised community activities also dropped over the past five years, with about 39 per cent saying they did so in 2018, compared with 48.6 per cent in 2013.

The proportion of residents who said they faced nuisance from neighbours also dropped, with 30 per cent of households saying they did so in 2018, compared with 48.1 per cent in 2013. The main types of nuisance were noise from neighbours, littering and smoking in common areas.

Sociologist Paulin Straughan of the Singapore Management University said more creative approaches were needed to encourage residents to interact socially, such as by getting them involved in organising activities, and by finding out the likes and dislikes of residents within each neighbourhood, which would vary depending on demographics.

More than nine in 10 said they were satisfied with their flat, neighbourhood and estate facilities.

Households that were dissatisfied with their flats faced issues such as spalling concrete and ceiling leaks, which occur in older flats, said the HDB. It added that it will continue to help flat owners address maintenance issues related to older flats.

The frequency of residents' usage of commercial facilities such as wet markets, coffee shops and hawker centres dropped, though there was a slight increase in the proportion of residents who went to the supermarket at least once a week, from 80 per cent in 2013 to 81.4 per cent in 2018.

Changes in the HDB living experience