SINGAPORE - In a bid to increase Singapore's food security and boost the efficient use of farm land, the Agri-Food and Veterinary Authority (AVA) will tender out 36 new plots of farm land in Lim Chu Kang and Sungei Tengah on 20-year leases.

The last time land was tendered out for agricultural use was more than two decades ago.

A total of 60ha of land will be up for bid in several tranches from August this year (2017). Currently, less than 1 per cent of land here is marked for farm use.

Experienced farmers with a good track record and are willing to adopt high-tech farming methods to boost productivity and use of labour will stand a good chance of winning their bids, the AVA said in a media briefing on Thursday (May 11).

"It is not simply for the sake of using a lot of high-end technology, with plenty of bells and whistles, but about how the farmers harness that technology," said AVA CEO Tan Poh Hong, pointing out existing modern methods of farming used by Seng Choon Farm and Kok Fah Technology Farm.

These farms have embraced modern technology and reaped benefits in a labour intensive industry. Kok Fah, for example, was able to reduce its manpower needs by 30 per cent through the use of automated seed sowing, irrigation and vegetable packing.

"Given our limited space, we will not be able to produce all the food we need," said Mr Wong in a blog post. 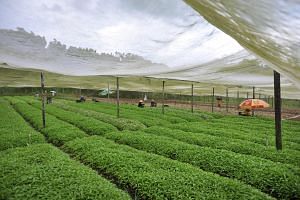 Agriculture land leases to be doubled to 20 years; 62 Lim Chu Kang farms will have tenures extended to end-2019

Plans to transform farms in Singapore

Hence, given these land constraints, the local agriculture sector must innovate and adopt modern practices to raise their productivity as there are other competing uses for the land, said the AVA in its statement.

In Kranji, the leases on some 62 farms are running out in 2019 to make way for military use.

Not all existing farmers were excited about the announcement, citing difficulties in financing the move or the cost of the new technology.

Said Mr Ho, who has been farming since 1992: "There is a large upfront cost to pay for in transitioning to the new place, and to tell us to adopt new and expensive technologies at the same time, this is something which only those with the financial capability will be able to swallow."

But vegetable farmer and chief executive officer of Eden Garden Farm Desmond Khoo, 30, said costs will be reduced in the long term. A 30 per cent reduction of manpower - a number he predicts can be achieved based on a recent test bed at his farm - is significant.

"If farmers do not embrace technology now, in the future, a foreign company can simply come in with these cost-saving technologies and make us obsolete," he told The Straits Times.

Farmers can also tap into the AVA's Agriculture Productivity Fund, a $63 million fund meant for farmers to invest in innovation and pay for high-tech, automated equipment.