"I visited all three cities during my two visits to Vietnam last year, and was very impressed with their rapid urban development. Their inclusion in the smart cities network will add to Asean's vibrancy," said Mr Lee.

He made the announcement at a dinner he hosted for his Vietnamese counterpart Nguyen Xuan Phuc, who is on a three-day official visit to Singapore ahead of the 32nd Asean Summit this weekend.

The smart cities network, which aims to better connect digital infrastructure and services like e-payments across the region, is Singapore's flagship initiative as the chair of Asean this year.

The Straits Times understands that the 10 Asean countries have put forward 26 cities to be part of the network. More details are expected to be issued tomorrow.

Singapore is keen to strengthen Asean's resilience and innovation by developing e-commerce regulation and technology infrastructure, and boosting cyber security in the region. Asean's digital economy is forecast to hit US$200 billion (S$265 billion) by 2025, according to a report by Temasek and Google last year.

Our friendship has strengthened over the past 45 years, and it will only grow stronger given the many bilateral and regional initiatives we are pursuing. 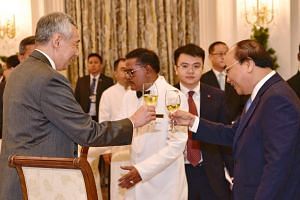 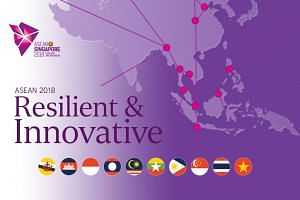 Get the latest Asean-related news and commentaries here

At the dinner, Mr Lee and Mr Phuc toasted the close partnership and warm ties between Singapore and Vietnam, which celebrate 45 years of diplomatic relations this year.

Mr Phuc, who studied economics at the National University of Singapore in the early 1990s, said: "Singapore has always been a trusted companion and closest among our partners in the region."

When Vietnam opened up, reformed and joined Asean in the 1990s, Singapore stood by its side, said Mr Phuc. He added that Singapore investment, particularly in the seven Vietnam-Singapore industrial parks, played an important role in Vietnam's economic development.

Mr Phuc also called on President Halimah Yacob and had a wide-ranging discussion with Mr Lee.

Mr Phuc and Mr Lee agreed to continue to tackle transnational environmental challenges, such as air and haze pollution, water quality management, coastal and marine pollution and climate change. Both countries have strong potential to work together to tackle challenges in the areas of solid and hazardous waste, air and water quality and noise management, the statement added.

In his speech, Mr Lee said Singapore and Vietnam have a common outlook on many regional issues, like the need to uphold the multilateral trading system and to maintain Asean's relevance and centrality.

Both countries recently signed the revised Trans-Pacific Partnership, and are working on the Asean-led Regional Comprehensive Economic Partnership trade pact.

"Our friendship has strengthened over the past 45 years, and it will only grow stronger given the many bilateral and regional initiatives we are pursuing," added Mr Lee.