SINGAPORE - Can solar energy be a solution for Singapore? How can parents with special needs children find a suitable school? Is buying an HDB flat always a “sure win” financial decision?

Data may provide the answers to these questions.

Three teams of students took a close look at publicly available data and came up with some interesting findings and insight. Not only that, they went a step further by explaining it in an easy to understand manner, through the creative use of videos and data visualisation.

They were the winners of the National Data Viz Video Challenge organised by the Government Technology Agency (GovTech). The competition invited students from institutes of higher learning here to contribute ideas on how to make use of open data in a way that makes a difference to the public. The Straits Times is one of the supporting partners for the event.

The contest, which kicked off in February, attracted a total of 82 entries. Twelve teams were shortlisted for the finals held on Saturday (Sept 30).

The team from Nanyang Polytechnic bagged the top prize with their project which looked at the use of solar power in Singapore and its potential as a viable source of energy. 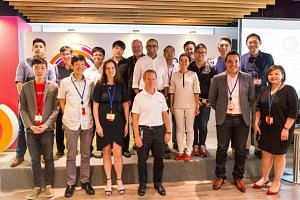 The members of the team - Manzel Joseph Seet, 18; Cyrus Wong Ying Chun, 24; Esmond Ng Yong Keng, 22 and Kat Yong Jie, 19 - made use of several open data sets, such as energy usage in Singapore and information on solar photovoltaic systems.

The team also won a prize for the best use of data.

Mr Ryzal Kamis, 23, from the Singapore Institute of Management (Global Education), won the second prize. He impressed the judges with an app he created which helps parents - including those with special needs children - find a suitable school. The app also maps out the route to take from home to school using different modes of transport.

The third prize went to the team which tackled the hot topic of HDB prices. The team was made up of representatives from three universities: Ng Chee Siang, 23, from the National University of Singapore; Javier Png Han Tiong, 23, from NTU; Evan Leow Yi En, 23, and Chua Xin Na, 21, from the Singapore Management University.

Two other teams were also recognised for their good work.

The team from ITE College East, which chose the topic of water security, won a prize for its creative video. Another team, made up of students from NTU and the Singapore University of Technology and Design, picked up an award for best storytelling with its project on the reintegration of ex-offenders.

To find out more about other finalists, click here.