3 in 4 Singaporeans surveyed believe this to be the case; Changi Airport seen as likeliest target

Three in four Singaporeans believe that it is only a matter of time before the country comes under a terror attack, with Changi Airport the likeliest target. But a third of people surveyed worry that not enough is being done to prepare its citizens for the eventuality.

These figures came out of a Sunday Times poll last week of 500 people across all ages and demographics who were surveyed at locations across the island, including transport hubs, shopping areas and Changi Airport.

The survey was carried out after a coordinated attack in the Belgian capital of Brussels killed 31 people and injured 300. Two suicide bombers detonated explosives in the departure lounge of Brussels airport, before a third blew himself up on the subway at the end of rush hour. 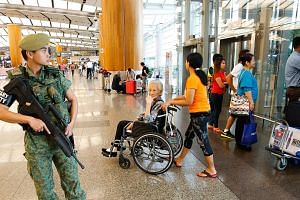 Nearly nine in 10 of those The Sunday Times spoke to had heard of the attacks in Brussels, and most were worried of something similar happening here, pointing to Singapore's position as a travel and business hub for Asia, and its support for the fight against the Islamic State in Syria and Iraq (ISIS).

Some also highlighted how ISIS has already hit close to home by attacking Indonesia, and that members of the jihadist group had also been arrested across the Causeway while planning to carry out terrorist attacks in Malaysia. When asked, those surveyed said they were most worried about attacks on "soft targets". Around 130 highlighted tourist attractions such as Sentosa, while 183 thought MRT stations and bus interchanges could be targeted. Over 200 each pointed at Singapore's financial district or its malls, especially those along Orchard Road. But nearly half of those surveyed believed Changi Airport would be the likeliest target.

Said private tutor Fred Tan, 57: "We are a centre for air travel, and people can go in and out of the airport easily. You can't tell who's a terrorist by how they look."

About 54 per cent surveyed believe Singapore is prepared for an attack, highlighting the vigilance of the country's security forces, the number of armed patrols they see at key nodes such as the airport and train stations, and the recent remarks on how the country was stepping up its measures.

On March 18, Law and Home Affairs Minister K. Shanmugam said the terror threat level facing Singapore was at its highest in decades, and announced the formation of a new fast-response police team and the beefing up of CCTV coverage at common places across the island.

There will also be efforts aimed at better securing private buildings and major events. "It is no longer a question of whether an attack will take place, but really, when is an attack going to take place in Singapore, and we have to be prepared for that," said the minister.

Two-thirds of those surveyed also said they were willing to undergo more thorough and increased security checks at places such as the airport, MRT stations and shopping centres. "I don't mind bag checks and car checks because these are for security purposes, and it is honestly better to be safe than sorry," said Mr Karan Deep, 30, a waiter. "At the end of the day, if people have nothing to hide, then they should have nothing to worry about either."

But a small group said they were worried about privacy. "My right to move about without being questioned is important," said Ms Anne Lemoine, 35, a Canadian engineer who has been living here for seven months.

But while the country may have the hardware, around 35 per cent wondered if citizens had the heartware to deal with an attack. Many of them believe Singaporeans still are not taking the terror threat seriously enough. "Physically, we are ready, but psychologically, no," said Mr Nathan Huang, 27, a consultant. Events manager Jasmine Teo, 26, added: "There's a lot of complacency. Even when we hear a fire alarm in the mall, few would actually react."

Others worried about the unrest that could arise after an attack.

Mr Daniel Rajan, 57, who is in between jobs, said: "Once there's a terrorist attack, there may be a reaction against a particular race or religion, and this will definitely threaten our social stability."

Added Ms Wong Fang Chin, 50, a financial consultant: "Deterrence is definitely a community effort but I feel that many of us keep to ourselves."

Nee Soon GRC MP Louis Ng, who is also on the Government Parliamentary Committee (GPC) for Home Affairs and Law, believes government initiatives such as SG Secure, which Mr Shanmugam announced, can play a part.

SG Secure, which would be launched later this year, aims to organise and train residents to guard against attacks, and maintain social harmony in the aftermath. "I think we need more drills on the ground, perhaps in the schools, to see if students are ready; and on the ground at the grassroots level - because in case of emergencies, these people will be the liaison officers," said Mr Ng.

Tampines GRC MP Desmond Choo said counter-terrorism preparation is not just the domain of the Government.

"The fast-evolving threat and modus operandi mean that we need everyone to help in identifying potential ill elements," said Mr Choo, who is also on the GPC for Home Affairs and Law. "By standing united, we will show that Singapore cannot be defeated by terrorists."

A version of this article appeared in the print edition of The Sunday Times on March 27, 2016, with the headline 'Terror strike here 'only a matter of time''. Subscribe
Topics:
More
Whatsapp Linkedin FB Messenger Telegram Reddit WeChat Pinterest Print Purchase Article Copy permalink