Armed intruders boarded three ships in separate incidents in the Singapore Strait in a span of four days last week.

They all happened in close proximity to one another in the eastbound lane of the Traffic Separation Scheme (TSS), the Regional Cooperation Agreement on Combating Piracy and Armed Robbery against Ships in Asia (ReCAAP) Information Sharing Centre said in a statement on Sunday.

On April 8, an engine-room crew member on the bulk carrier Trina Oldendorff was hit in the head by an intruder when he tried to shout for help.

The vessel was travelling near Tanjung Pergam in Indonesia when four intruders armed with knives were seen at 1.47am in the engine room. The intruders escaped from the ship after hitting the crew member.

"A search on board the ship was conducted with no further sighting of the perpetrators. The master declared nothing was stolen, the crew was safe and accounted for," the centre said.

The ship master continued with the voyage and reported the incident to the Singapore Port Operation Control Centre the next day.

The Republic of Singapore Navy's Maritime Security Task Force, Singapore Police Coast Guard, Malaysian and Indonesian authorities were notified and a safety navigational broadcast was made.

The second incident occurred at 5.50am that same day.

Petroleum tanker Harrisburg was travelling in the same area when two intruders boarded the ship. A search on board the ship was conducted with no further sighting of the intruders.

The third incident took place at 1.15am on April 11. Bulk carrier Pantazis L was in the same area when four intruders were sighted in the engine room. 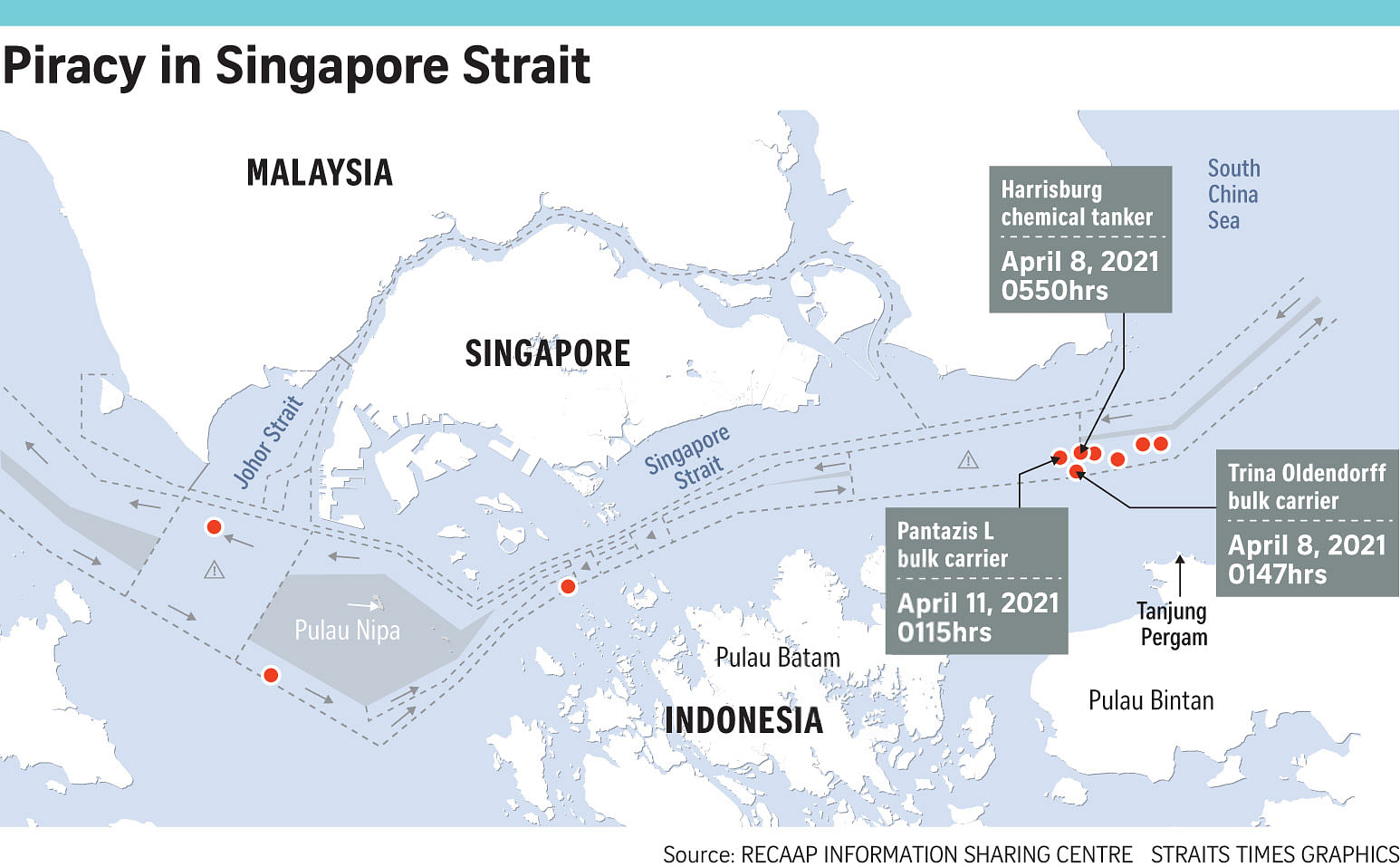 The ship master later alerted the Singapore Vessel Traffic Information System. A search on board was conducted with no further sighting of the perpetrators.

However, the crew reported that some engine spares were stolen.

A total of 10 incidents were reported from January to April 2021, out of which nine occurred in the eastbound lane of the TSS.

ReCAAP noted that the Indonesian Navy had arrested five perpetrators in the area on Feb 21. It added that the spate of cases since suggests there are other criminal groups operating in the Singapore Strait .

"As the perpetrators of these incidents are not arrested, there is a possibility of further incidents in the Singapore Strait. All ships are advised to exercise enhanced vigilance, adopt extra precautionary measures and report all incidents immediately to the nearest coastal State," the organisation said.