SINGAPORE - About half the amount needed to pay for a temporary market for stallholders who lost their livelihoods in a fire that razed a wet market and coffeeshop in Jurong West this month has been raised, with plans on track to have it up and running by Chinese New Year.

About $280,000 of the $600,000 needed for the "ground-up effort" has been donated by temples, clan associations and other organisations. Out of this amount, $200,000 came from 10 businessmen, said chairman of the market building fund Henry Ho on Thursday (Oct 27).

Fifty one stallholders lost their livelihoods when a fire swept through a wet market and coffeeshop at Block 493 Jurong West St 41 on Oct 11, and damaged a coffeeshop at the adjacent Block 494.

A 41-year-old man, Lim Ying Siang, was charged in court on Oct 15 for allegedly starting the fire by setting styrofoam boxes alight at the market at Block 493 at around 3am.

The job fair, organised by the People's Association and the Employment and Employability Institute (e2i), was held to help displaced stallholders find interim employment or long term jobs. It was also open to residents in Jurong Central area. 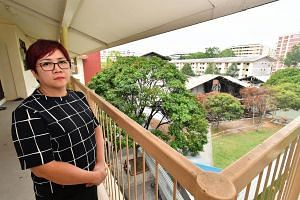 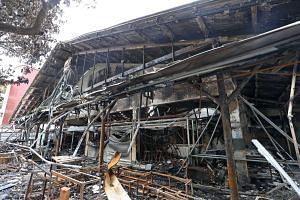 Jurong stallholders affected by fire not keen on relocating

NTUC FairPrice, Breadtalk and Food Republic were among the 16 companies that took part in the fair, offering 800 jobs, which focused mainly on the food and beverage sector. Vacancies included kitchen assistants and cooks.

Speaking at the fair, Jurong GRC MP Ang Wei Neng said: "Stallholders have to wait for the new market to be ready, so they need a full-time job for maybe the next one year or two. Those who are waiting for the temporary market to be ready, as well as the Block 494 coffeeshop which will take a while before it can be renovated, can also look for part-time or temporary jobs."

Demolition of block 493 started on Oct 19 and will take about three weeks to complete, while the rebuilding of a new market is expected to take more than a year.

In the meantime, a 30-stall temporary market at a new basketball court in front of Block 498 is being built, with 21 stallholders committed, said Mr Ang.

Building plans have been submitted for approval, and several contractors have submitted quotes, he said, adding that stallholders will sign lease agreements in early December.

The $800 a month rent to be collected from stallholders at the temporary market will go to a welfare fund to help needy and elderly residents, he said.

Mr Tom Zeng, 47, who lost his you tiao stall at the Block 494 coffeeshop, was at the job fair with his wife looking for an interim job while waiting for renovation works to be done.

"I hope to find a kitchen job because I like to cook. I've been relying on savings, but I'm worried because I don't know when that will run dry."