SINGAPORE - A 23-year-old woman died from her injuries after the car she was travelling in collided with an SMRT bus at a traffic junction in Bukit Timah early Sunday (April 22).

Two others in the black Mercedes, including the 24-year-old woman driver, were injured. The Straits Times understands that both are still warded in hospital.

The police told ST they were alerted to an accident involving a bus and a car at the junction of Jalan Anak Bukit and Jalan Jurong Kechil at about 1am.

"The car driver, a 24-year-old woman, and her passenger, a 26-year-old man, were conscious when taken to Ng Teng Fong General Hospital," police said.

They added that a 23-year-old woman, who was a passenger in the same vehicle, was unconscious when taken to the National University Hospital, where she subsequently succumbed to her injuries.

ST understands that the male passenger was in the front passenger seat, while the deceased was seated in the rear.

The accident was believed to have happened when the black Mercedes was making a right turn from Jalan Anak Bukit to enter the Pan-Island Expressway.

The SMRT bus, understood to be off-service at the time, was going straight along Jalan Anak Bukit towards Clementi Road, when the vehicles collided at the traffic junction. The bus driver was not injured.

Photos of the scene showed the SMRT bus with its windscreen badly smashed and glass shards strewn across the road.

The black Mercedes could be seen with dents on its left passenger door.

In response to queries, SMRT vice-president for corporate communications Margaret Teo said on Sunday: "We are saddened that the accident has occurred, and will be reaching out to the deceased’s family to provide assistance during this difficult time."

She added that the company will be extending their fullest cooperation to the police in their investigations.

Meanwhile, the bus driver has been reassigned to non-driving duties, while assisting with investigations, Ms Teo said.

The accident comes a day after an electric-scooter rider was hurt in a collision with a taxi at the same traffic junction. The e-scooter rider, a 49-year-old man, was taken to Ng Teng Fong General Hospital.

A photo of the accident, posted in online Telegram chat group SG Road Blocks/Traffic News, shows the e-scooter crushed under a white vehicle.

On Thursday evening, National University of Singapore undergraduate Kathy Ong, 19, died after the Silvercab taxi she was in collided with a car.

Ms Ong was a rear-seat passenger in the taxi with three other friends, who were all injured in the accident at the junction of Clementi Road and Commonwealth Avenue West. 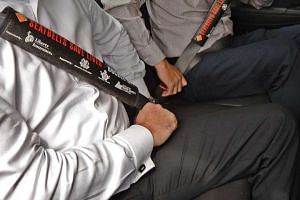 Observers told ST that passengers seated in a vehicle's rear may have a higher risk of suffering severe injuries in an accident, and advised them to belt up.

Mr Gerard Pereira, a training manager at the Singapore Safety Driving Centre, said: "It is also a norm that back-seat passengers are usually occupied, (such as) using their phones or chatting.

"So the driver should advise them to put on their seat belts when they get into the car."

Ang Mo Kio MP Ang Hin Kee, deputy chairman of the Government Parliamentary Committee for Transport, suggested using data analytics to show traffic patterns in areas that possess some risks, and implement a system "where the turning lights are activated only after the straight moving lights have turned red".

He added that measures on the road to slow the speed of vehicles at such junctions can also allow drivers to better respond to emergencies.